Rashon Ceaser and Ajalen Holley combined for 17 catches, 230 yards, and two touchdowns for ULM against Troy on Saturday. They also made two of the biggest plays in the game that got the Warhawks to 3-1 on the season.

One of the things ULM head coach Todd Berry mentioned in his press conference this week was the team's offensive identity. Without Kolton Browning, that side of the ball has been inconsistent for the Warhawks so far this season. But at its core, Berry said they should be a running team that relies on play action in the passing game. Against Troy, RBs Centarius Donald and Tyler Cain combined for 21 carries and 59 yards. Troy really sold out on the run, as they should have - they wanted to force Pete Thomas to beat them. He did.

A few weeks ago I wrote about how Berry really loves to use the whole field when designing plays. We saw a new wrinkle to that concept on Saturday.

ULM has already run a few plays out of this look so far in the game. In the second quarter Thomas threw a quick screen out to Ceaser (in the slot) that went for negative yardage, and then earlier in this drive Holley ran a go route to clear out for a quick out route that Ceaser took for a first down.

Berry saw how Troy defended those plays and realized that this should be an easy touchdown. The key is how far Holley lines up on the outside - he's almost standing on the sideline. Usually coaches don't want their receivers to line up so wide because the corner can use the sideline as an extra defender (you'll notice most of the time that receivers line up around the numbers, 5-7 yards away from the sideline. This gives them more freedom to run whatever route they need.). But in this case, Troy brought the strong safety into the box as an extra linebacker and has isolated two defensive backs to cover two of the more dynamic, explosive receivers in the Sun Belt - a clear mismatch. 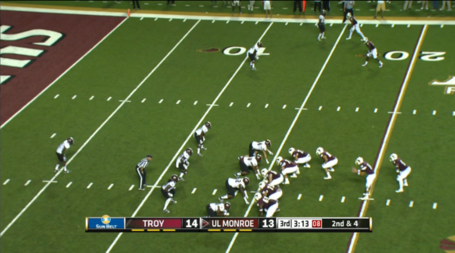 ULM can basically run any route combo they want out of this and feel pretty confident that they'll win the majority of the time. Because Troy has been playing a lot of man coverage against it, they decided to run a simple pick (or, what offensive coaches would call "rub") combo. 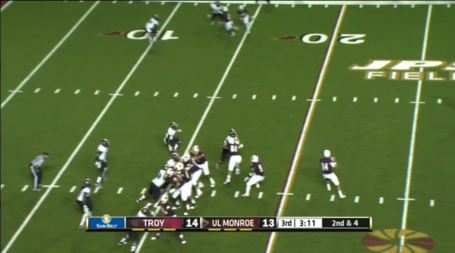 Thomas gives a pretty lazy play-action look to Donald to start the play, but the safety that came down into the box fell for it anyway, leaving that entire space behind him open for Holley. Notice how at this moment, both defensive backs are basically covering Ceaser, who's responsibility on this play is basically to run directly toward the outside cornerback and get in his way. Another mistake from the Trojans defense? The corner doesn't get a jam on Holley at the line, giving Holley a free release to the inside and setting himself up to get picked by Ceaser. 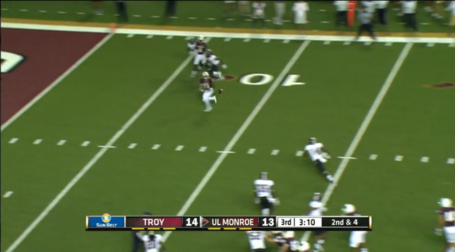 The corners don't switch, the safety got caught up in the play action fake, and Holley is left wide open for an easy score. The free safety, who you can see lined up in the middle of the field pre-snap, makes a feeble attempt at a tackle at about the four yard line, but it's too late. Holley spins off of him and gets to the endzone to re-take the lead.

With a little over seven minutes to go in the game and the Warhawks trailing again, Pete Thomas took the field looking for another game-winning drive.

To open the drive, ULM came out with three receivers, a running back and a tight end. Troy responded by giving a 3-3-5 look. But again, the alignment of the Troy defense provided an opportunity for a mismatch. 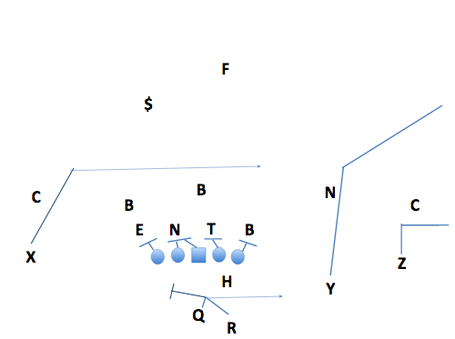 Holley and Ceaser represent the "Z" and "Y" receivers in this play, respectively. Again, it's a pretty basic "smash" concept, which creates a conflict for the corner. If it's man coverage, Ceaser has to get an outside release against the nickel and he should be able to get open deep on the outside. If it's zone (likely cover 3 in this scenario) then the corner will sag off Holley underneath in order to cover Ceaser, so Thomas will dump it off to the out route. 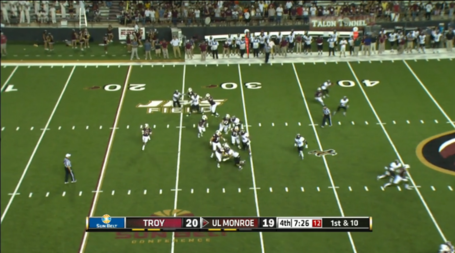 After the play-action to Donald, Thomas quickly notices that it's man coverage, Ceaser got his outside release on the nickel, which just means he has to make the throw. It ends up being maybe his most impressive throw of the night, one in which he went 28-43 for 328 yards and two touchdowns. 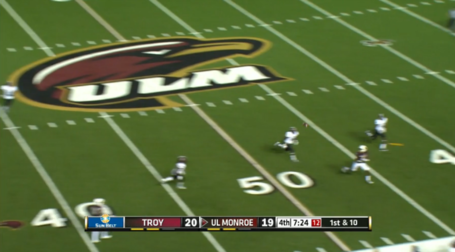 The throw hits Ceaser (who finished with 12 catches for 121 yards) perfectly in stride and away from both the nickel who he outran out of his break and the free safety who was late getting over because he was held the play action (the flag you see in the frame was on the defense and declined).

This play got the Warhawks to the Troy 40-yard line and on their way to a game-winning field goal by standout special teamer Justin Manton with two minutes left in the game. Troy got the ball back but were unable to convert on a fourth down, and ULM moved to 3-1, 2-0 in the Sun Belt.

To me, the final score doesn't really indicate how much better than their opponent the Warhawks looked. They got out to a 13-0 lead which could've easily been 20-0 if not for some mental mistakes on their part. Some bad/unlucky turnovers led to Troy getting back into it, but in watching the game you never really felt like ULM was ever actually going to lose. I had a similar feeling during the Idaho game, which also ended up being close after ULM jumped out to an early lead.

But Idaho and Troy represent maybe the two worst teams in the Sun Belt, and ULM can't afford to let teams back into games anymore. They travel to 2-2 Arkansas State this week, a team that is currently ranked second in our SBC power rankings, and go to Kentucky after that. It's a pivotal stretch for a team - moreso an offense, as the defense ranks 42nd in defensive efficiency - that has looked very inconsistent so far this season.

I'll have a Warhawks-Red Wolves preview up later in the week with a more detailed look on how ULM might be able to avoid those mistakes and take advantage of what they've been doing well.