Share All sharing options for: True Blue Review: Grading the loss at Minnesota

The Blue Raiders got a heavy dose of reality on Saturday. Following a 61-7 win over FCS punching bag, Savannah State, MTSU struggled to move the football in the first half and although the defense didn't look terrible, they still allowed Minnesota to drive the ball deep into Middle Tennessee territory several times.

They turned a blowout into a respectable final score and even had a chance to make a game of it early on in the third quarter. If it's any consolation, it was the Big Ten's biggest win of the week.

Still, with the explosive Western Kentucky offense coming to Floyd this weekend, the Blue Raiders must make adjustments if they hope to take down their rivals from Bowling Green, Kentucky. But before we really start talking about the red blobs, let's break down Saturday's contest a little more.

First Half Defense: B-

Only gave up two long scoring drives. A 10 play 69 yard drive resulting in a Golden Gopher touchdown and a 5 play 56 yard scoring drive in the second quarter. The other two Minnesota touchdowns came off a pick-six and an interception, resulting in a short field for the hosts.

The Blue Raiders left plenty to be desired on the offensive side of the ball. Grammer threw two picks and Middle Tennessee was only able to get the ball into Minnesota territory twice and never got in the red zone.

You can't be too upset with the Blue Raiders' special teams but it wasn't anything close to flawless. Here are three plays that really stuck out.

Second Half Offense: B

Reggie Whatley provided a spark at the beginning of the third quarter when he took a handoff 44 yards for the touchdown.

Austin Grammer completed a couple passes downfield and got the ball down to the one yard line after the pass interference call on a wild play that I'm still not sure about.

But then came a puzzling play call.

Trailing 28-7 on a 3rd and goal from the Minnesota 1 yard line. Middle runs an option that is completely blown up by the Golden Gophers. Grammer is hit for a three yard loss and the Blue Raiders are forced into a field goal.

Grammer would throw one more interception, but this one would not lead to any points.

One more negative before I focus on the positives.

Down 35-17 at the start of the 4th quarter, things didn't look good but Middle Tennessee was not out of it. However, after a 16 play drive that chewed up nearly five and a half minutes resulted in a missed field goal, the game was all but over.

Down three possessions, you would think the idea would be to pick up the pace a little bit. Not let valuable seconds continue to run off the clock.

Other than those moments, it was a solid second half of work from the MTU offense and by the end of the game, the offensive numbers looked pretty good.

Second Half Defense: A-

The defense picked  it up in the second half as well, forcing the Golden Gophers to punt four times out of their five second half possessions. The D held also held Minnesota to two 3-and-outs.

They did, however, surrender a big touchdown just as Middle was trying to climb back into the game on a 3rd and 4 from the MTU 48.

Second Half Special Teams: B-

The special teams blocked a punt but also had a huge penalty that moved the ball from their own 48 to their own 20 in the early moments of the 4th quarter. 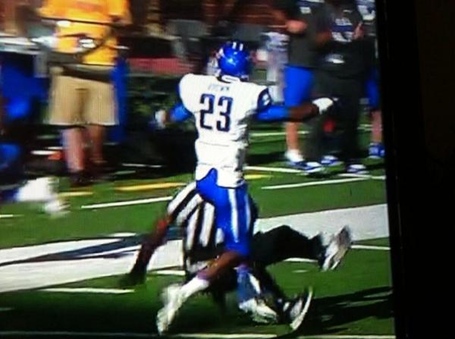 Middle Tennessee's Chris Brown who was like Mr. Referee if they "Run It" this way I'm gonna "Take You Down" And then he was all like "Dueces." as he walked away. I'm sure the referee will remember that hit "Forever."

We talked about it and provided a replay in the post game write up.

Get out your best black suit or buy the t-shirt, the red team is coming to Murfreesboro on Saturday. Full preview later in the week.