Tale of the Tape: Tulsa vs. Tulane

The Green Wave open their 2014 season in Tulsa Thursday night in their first game as members of the AAC against the Golden Hurricane. Can the boys from Uptown build on their 2013 season?

Share All sharing options for: Tale of the Tape: Tulsa vs. Tulane

The Skinny: For the 11th time and first as members of the American Athletic Conference, the Green Wave and the Golden Hurricane will square off in a Thursday night showdown at H.A. Chapman Stadium. Tulane, who beat Tulsa 14-7 at the Superdome on October 26th of last year, is looking to make it two in a row in a series that dates back to 1968 when Tulane beat the Golden Hurricane in old Tulane Stadium 25-9 on November 9th of that season.

More importantly the matchup on Thursday marks the first time that former Green Wave player Devin Walker will visit Tulsa since his career-ending injury in 2012.

"Walker's return to Tulsa is a way of thanking the community at large for saving his life on that September day in 2012,"  Tulane coach Curtis Johnson said Monday during the weekly AAC teleconference call, "He had came to me early last week about going with the team to the game. The people there in that city were instrumental in saving his life that day."

According to the Tulsa World, Walker will also deliver a halftime message on the video board to the Golden Hurricane faithful.

"I think it's nothing short of amazing what Devon has done to date in dealing with the injury, the paralysis, and moving forward with his life and being an example and an inspiration for his team and for people with spinal cord injuries," Tulsa coach Bill Blankenship said on last week to reporters, "It's very surreal even now."

Tulane on offense: When you talk offense and Tulane in 2013, the word "anemic" is thrown around a lot. Among FBS schools (that's a fancy term for Division 1-A) the Green Wave ranked 112th last year in total offense, only ahead of schools like Memphis and the University of Florida. As opposed to the Gators and the Tigers, the Green Wave was the only school of the three to not only play in a bowl game, but also post a winning record in 2013.

That being said, with the departure of leading receiver Ryan Grant, and running back Orleans Darkwa, the Green Wave's offense is going to have rely on solid quarterback play from Tanner Lee, a redshirt freshman that for all intents and purposes looks like your standard Tulane bro. 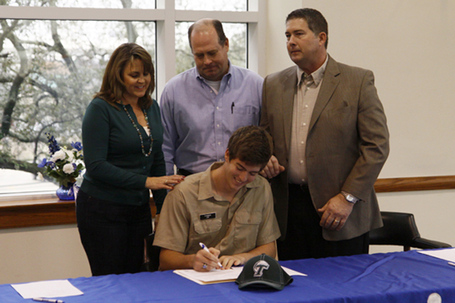 A native New Orleanian and graduate of Jesuit High School (the alma mater of William Nuschler Clark), Lee's physical prowess and strong arm helped him earn the starting job over Montana and Devin Powell, both of whom saw snaps behind center in 2013.

"I think his command of the offense as well as his leadership and his ability to not make mistakes earned him the job," Johnson said a couple of weeks ago, "I think he's going to have a great career here at Tulane."

Along with that, Lee's targets in 2014 will include WR Teddy Veal, a highly touted freshman that was reinstated to the team after being charged with rape, a charge that would eventually be dropped by the Orleans Parish District Attorney. An early enrollee, Veal is lauded for his quickness, something that Johnson made mention of earlier this month.

"I love to see him run," he said to reporters.

Tulsa on offense: Historically, Tulsa's football program has been known for explosiveness on offense, dating back to the days of Francis "Close the Gates of Mercy" Schmidt, who coached the Golden Hurricane from 1919 to 1921 and ran up scores of 152-0, 121-0, and 92-0 against opponents with his multiple laterals and trick plays.

Thankfully, he didn't coach in the era of social media.

That being said, in 2013, Tulsa averaged 191 passing yards and 165 rushing yards and finished 104th in scoring offense with an average of 21 points per game, factors that played a large role in the team going 3-9 last season, a far cry from the days of the offensive days of Todd Graham and Steve Kragathorpe.

In 2014, with a healthy Keyarris Garrett at wide receiver returning to the lineup (67 receptions, 845 yards, nine touchdowns in 2012) and an improved Dane Evans at quarterback, coach Bill Blankenship wants to see it transfer to the field on gameday.

"I'm confident on what we saw in fall camp," Blankenship said Tuesday, "But it has to manifest on the field Thursday night. We have to show that we're going forward as a program."

Tulane on defense: In 2013, the Green Wave had one of the best defenses in school history as they allowed 21.4 points per game, good for 18th in the FBS.

However, in 2014, the Green Wave on defense will be without four contributors of the six on the front six and has been lacking depth with the linebacker corps. The good news is that the Green Wave return linebacker Nico Marley as well most of the secondary in guys like Lorenzo Doss at cornerback as well as safeties Sam Scofield and Darion Monroe. The three aforementioned in the secondary should provide leadership and experience for the Tulane defense.

Tulsa on defense: Tulsa really regressed on the defensive side of the ball last year, allowing 33.9 points per game, good for 102nd in FBS. With nine returning starters, the Golden Hurricane are going to rely on a pair of stalwarts in the secondary, Dwight Dobbins and Will Barrow, who was sorely misused last season in Tulsa. Along with that, the Golden Hurricane return free safety Demarco Nelson, who could provide a big boost for the team in 2014.

Despite leading the Golden Hurricane to the 2012 Conference USA Championship and having ties to the school, Bill Blankenship is entering the 2014 season on the hot seat. After plodding through to a 3-9 record in 2013, Blankenship knows that a win over the Green Wave cool his seat for the moment.

For Tulane, who beat Jackson State in their opener last year, the program is looking for momentum off their appearance in the 2013 New Orleans Bowl. With an inspirational leader in Devon Walker on the sidelines, there's no doubt that the Wave could pull off the win in Chapman Stadium.