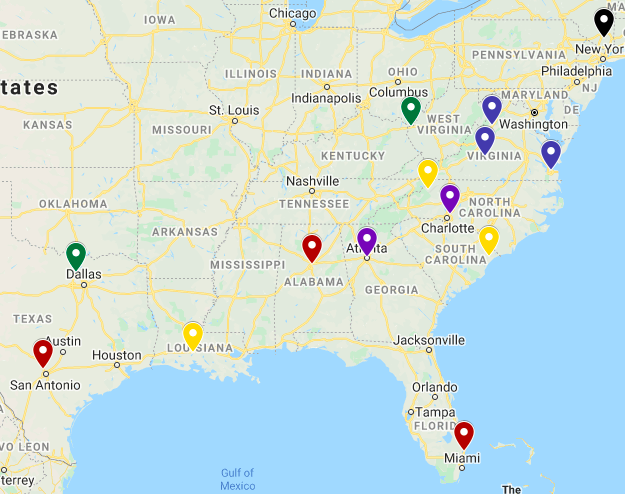 The American Athletic Conference (AAC) is going shopping for new members. The upcoming departure of Cincinnati, Houston, and UCF to the Big 12 will leave the AAC with only 8 members for each major sport. The AAC is widely expected to extend invitations to at least 4 new members, and possibly more.

In our last post, we presented the major metrics (rankings, attendance, budgets, etc.) for every program that's in the mix. Today, we'll go through the top candidates for an AAC invite to assess the strength of their case.

Conference USA has three programs that deliver the whole package: Successful football programs, top-tier facilities, and prime locations in major media markets. Consider these three to be front-runners in the competition for an invite to the AAC.

University of Alabama at Birmingham (UAB)

The Sun Belt Conference includes several football teams that punch far above their weight, and have achieved an impressive track record of upsets against Power 5 opponents. If the AAC wants to add members purely to add football strength to the conference, these three programs will be near the top of their list.

The Virginia Programs With Big Budgets

The state of Virginia has three universities with outsized athletic budgets compared to the other programs under consideration. All three have significant flaws in their qualifications, but if the AAC is looking for programs that can keep pace with the $59.5 million budget of the median AAC program, these are some of the best available options.

In the last major round of conference realignment in 2013, AAC commissioner Mike Aresco focused on adding programs in major metro areas in order to address large media markets and position the conference for better TV deals.

Over the previous 8 years, the proliferation of cable sports channels (which generally show a single game nationally, rather than different games in different markets) and over-the-top streaming services has made traditional "media markets" less relevant for TV revenue. At the same time, the population surrounding a university is still an important source of potential fans and TV viewership, so a location in a metro area with a high population is still a significant advantage from a TV revenue perspective.

The two universities below have auspicious locations in large, fast-growing metro areas, but have generally been undistinguished in football and basketball.

Conference USA has two programs that haven't had enough football success to make the list of "standouts", but still have enough all-around success to potentially push themselves into the conversation.

The Other Service Academy

(Ok, this section only has one team, but we're trying to keep it consistent)

The AAC includes the US Naval Academy (Navy) as a football-only member. It tried inviting the US Air Force Academy (Air Force) to join from the Mountain West, but they declined. They might instead consider the other major service academy, which is still playing football as an FBS Independent.

Realistically, only teams from the first two sections ("Conference USA Standouts" and "Sun Belt Football Powerhouses") are likely to receive serious consideration for an invite to the AAC. The other programs in this list are in the conversation among fans, journalists, and talking heads, but the points listed as "Cons" make each of them a long shot to "move up" to the AAC in this round of realignment.

Next time, we'll be looking at the potential new geographic organization of the AAC after it picks up its presumptive new members.