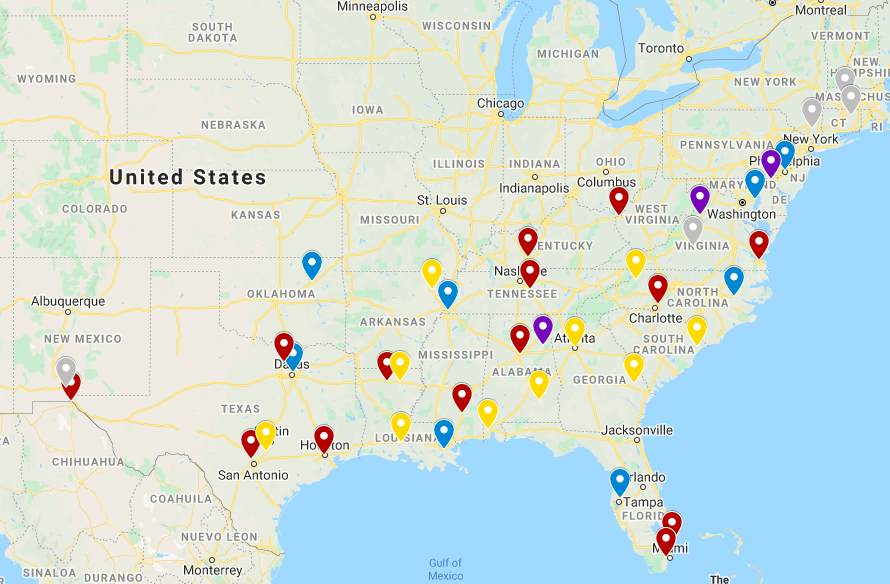 Map of potential realignment candidates - click for an interactive version.

Conference realignment is back in full swing, and seems destined to bring major changes to the American, Conference USA, and Sun Belt conferences. In this post, we'll do a broad, numbers-focused overview of all the teams expected to be in play this round of realignment.

To quickly recap the state of play:

The AAC is now expected to seek new members from Conference USA (C-USA) and/or the Sun Belt Conference. As shown in the map above, all three conferences share a geographic footprint that sprawls across the southeast from the Mid-Atlantic to Texas. If programs depart either C-USA or the Sun Belt to join the AAC, those conferences may replenish their numbers by extending invites to FBS Independents, successful FCS programs, or from each other.
What will conferences be looking for in potential expansion candidates? There are many factors that conference commissioners, university presidents, and athletic directors will be considering, but the top ones are:

With that in mind, we'll go through all the potential candidates for this round of realignment to see how they stack up on those metrics.

After the departure of Cincinnati, Houston, and UCF, the AAC will effectively have 8 remaining members for all major sports (Wichita State is a non-football member, while Navy is a football-only member). With the exception of East Carolina, all football members of the AAC are in large metropolitan areas.

Any program seeking an invite to the AAC will inevitably be assessed by how it compares to the current membership, so it's worth quickly summarizing some key metrics for the existing members:

Compared to the AAC, Conference USA is less prominent on most metrics. Median home football attendance is 19,069 per game (38% lower than the median of remaining AAC members), and median athletic budget is $32,773,870 (45% lower than median AAC budget).

Conference USA followed a similar membership strategy to the AAC, and most of its members are in large metropolitan areas.

By the numbers, the Sun Belt conference is broadly similar to Conference USA. Median home football attendance is 18,254 per game, and median athletic budget among programs with football is $28,889,819.

The Sun Belt has followed a different membership strategy compared to the AAC or Conference USA, and has many members in small college towns and mid-sized cities that aren't within large metropolitan areas.

Excluding Notre Dame (has an affiliation with the ACC) and BYU (joining the Big 12), there are five teams currently competing as FBS Independents in football. Each program has separate reasons for its current independent status, which present potential obstacles to adding them as full or football-only members of the AAC, C-USA, or Sun Belt Conferences. Despite this, both Army and Liberty will likely get serious consideration by several conferences during this round of realignment.

Finally, there are several teams within the relevant geographical footprint that have been successful at the Football Championship Subdivision (FCS) level, and would be potential candidates to "move up" to FBS football.

The major constraints that limit the number of schools in this list are geography and stadium size. Many of the most successful FCS teams (e.g. North Dakota State, Montana, etc.) are very far outside the geographic footprint of the AAC/C-USA/Sun Belt in the Southeast. Other successful FCS programs (e.g. Sam Houston and Villanova) have football stadiums that aren't big enough to hit the minimum of 15,000 average home game attendees required for FBS participation.

It's very unlikely that any of these programs would be invited directly to the AAC, but they will be in consideration by C-USA and the Sun Belt as they look for candidates to replace any departing members.

Next Time: Assessing the Top Candidates for AAC Expansion

With the numbers in hand, our next post will go through the detailed pros and cons of the top candidates the AAC is considering. Stay tuned!