Lucas Rhoden of our SBNation ROLL TAHD site was kind enough to answer some questions about 'Bama's revenge matchup against ULM on Saturday.

The ULM Warhawks continue a fairly unforgiving out of conference slate with yet another road trip to one of the SEC's blue bloods in Tuscaloosa. Lucas Rhoden (@LBRhoden) of SBNation's Alabama Crimson Tide site Roll Bama Roll joined us to answer some questions about what Warhawks fans might expect from their opponent this weekend.

1. Following the Ole Miss game we're seeing the usual--and likely premature--eulogies that come out after an Alabama loss. What problems from the Tide's performance do you think are being overblown by the media, and which ones might indicate a more serious flaw in Nick Saban's team?

Lucas: Every time Alabama loses to a HUNH team pundits and fans alike make the claim that Nick Saban's defense cannot beat the spread offense. People said the same they are saying now after last year's losses to Ole Miss and Ohio State, the 2013 Iron Bowl and Sugar Bowl and the 2012 Texas A&M game when Johnny Manziel introduced himself to the world. Pundits make their asinine claims even though the blame for any of those losses, with the exception of the 2013 Sugar Bowl, cannot be placed on the defense. Alabama has been handicapped by bad special teams play, turnovers or stagnant offensive play in each of those games.

The media is quick to point out Alabama's issues in the secondary, and there have definitely been issues. That was not the problem in last week's game versus the Rebels. Alabama's secondary made some big plays over the course of the game. Minkah Fitzpatrick, a true freshman starter, made a huge third down stop and almost made a game-changing interception with around three minutes left in the game that would have given Alabama the ball close to the 50. Instead, Ole Miss punted and Alabama had to start the drive from the five. The Tide's defense did everything you can ask for outside of intercepting the ball on the crazy Chad Kelly to Quincy Adeboyejo play.

Alabama's issues are the same as they have always been: turnovers and inconsistent special teams play. Those are correctable issues. Two of the interceptions would never had happened had Alabama been able to run a normal offense instead of a come-from-behind, pass-heavy offense. The fumbles on special teams can be corrected, whether it is a personnel change or coaching adjustment. The reality of the Ole Miss game is that Alabama probably wins with two or three more possessions. Alabama lost due to turnovers.

2. Do you think the aim of this game will be primarily to win comfortably over ULM and avoid injuries (i.e. they might take it easy just a little bit), or is Saban going to try and bring the hammer down on the Warhawks after a frustrating loss?

The objective of this game will be for Alabama to establish what kind of offensive team they want to be. The Tide has shown a number of different looks offensively, including the disastrous move of starting Cooper Bateman in the Ole Miss game. Alabama looked like an older version of themselves in the Wisconsin game, with a powerful running attack that dominated the Badgers.

Lane Kiffin decided he wanted to experiment for the Middle Tennessee State game with varied offensive looks. The Tide resembled their 2014 version, only less effective than when Blake Sims was leading the offense. We saw both versions of this team in the Ole Miss game. The results were disastrous. Even Saban said the team needed to form an offensive identity. The Bateman experiment was a failure. Alabama is not built to be a lateral offensive team. Screens and sweeps should be an element to this offense, not a cornerstone.

This team is built to be a power running team. The offense line is huge, as is Derrick Henry. Kenyan Drake is a change of pace back with a lot of versatility. There is no true deep threat in the receiving corps, but O.J. Howard is a legitimate threat at the tight end position. We know what kind of defense the Tide has. In this game Alabama will show what kind of offense they will have for the rest of the season.

3. ULM hasn't had much of a run game the past couple of years, so it stands to reason that they're going to try and use Ajalen Holley and Rashon Ceaser to generate the majority of their offense. What sort of defensive strategy will Alabama use to try and shut them down?

Alabama is willing to let teams hit on short completions. Louisiana-Monroe will have some success on screens, swing passes and slants. The Tide will live with those quick hitters. Alabama will shut down intermediate routes. Anything ULM wants to hit vertically will have to be a deep pass. Alabama will dare Ajalen Holley and Rashon Ceaser to beat Marlon Humphrey and Cyrus Jones over the top.

What Alabama does so effectively is make the quarterback beat them. Garrett Smith will have to play the game of his life to beat Alabama. The Crimson Tide defense is stifling when the opposing quarterback makes mistakes. Smith will have to complete a high percentage of his passes, make good decisions and test the Tide deep to have a chance to pull off the upset.

4. How do you see the quarterback situation playing out in both this game and for the rest of the year?

Jake Coker won over the majority of the fan base with his gutsy performance against Ole Miss. Coker was thrown from the frying pan into the fryer after Bateman started the first four drives. Bateman was accurate at 11-14, but the routes were short (87 yards passing) and a poor decision led to an interception that ended his day. Coker battled back and led Alabama's doomed comeback attempts.

Coker looked more in command of the offense than Bateman did. He also showed the awareness to know when to tuck and run and looked like a pretty decent runner when he did. Coker will get the start, barring an unforeseen change before Saturday. I expect Coker to take the reins and establish himself as Alabama's starter for 2015.

5. Give us a prediction, and what is your favorite college football smack talk-related billboard of all time? Sorry, couldn't resist.

This game will not be close. For starters, Alabama has an extra bit of motivation following 2007's embarrassing loss to the Warhawks. Alabama will do what they do well and run the football. I expect ULM to move the ball between the 20s and struggle in the redzone. Look for Alabama to win 45-10.

I don't really have a smack-talk related billboard that sticks out to me, but I do have a trash talk one that I love. Charlie Weis might be the worst coach to ever coach in college football. He destroyed Notre Dame, then Kansas. Plus, for things that happened 30 years before I was born, we hate Notre Dame at Alabama.  But I grew up with people making fun of the Tide, so I love to see other blue-blood college programs suffer. So this is my favorite billboard. 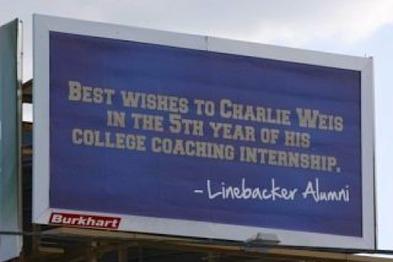 Thanks again to Lucas Rhoden and Roll Bama Roll for joining us! If you have any thoughts on what Lucas wrote or just have some general thoughts of your own, feel free to leave a comment below.