Erase This Play: Old Dominion Screwed by Referees In 80-20 Loss To North Carolina In 2013

A little deviation to focus on a little bit of referee misconduct, if you will.

Share All sharing options for: Erase This Play: Old Dominion Screwed by Referees In 80-20 Loss To North Carolina In 2013

So originally, when we were creating our version of the Erase This Game series, we took into consideration two games from the same weekend in 2013: an 80-20 North Carolina win over Old Dominion, and an 80-14 Florida State win over Idaho.

These games were equally lopsided, sure, but they weren't exactly shocking blowouts other than in sheer magnitude. Also, we had already written about them back when the site first launched, so there's also that.

But then, on a whim, I stumbled on the UNC highlight video of that game and something caught my eye. No, it wasn't the Monarchs absolutely wretched kick coverage, though that was bad. Nor was it the secondary's incredible ability to repeatedly get bombed over the top.

Hell, it wasn't even the sheer, mind-blowing concept of one team outscoring another by a 73-10 margin in the course of 32 1/2 minutes of football. No, it was this:

Seems innocuous enough, right? A slant route that leaves the receiver diving for the end zone and a touchdown.

Except, look at that zoomed-in replay again. 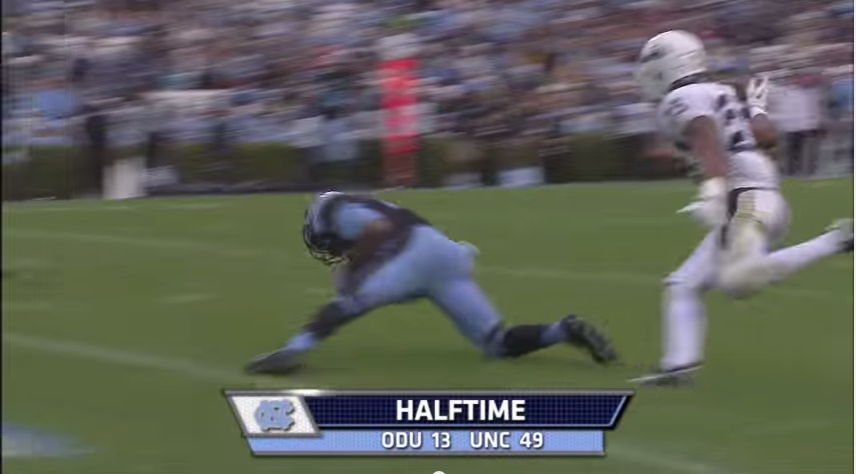 Uhm, I don't think he quite made it there; can we zoom in just a little more and add in a couple doodles for clarification?

Yup, that is most definitely a knee down on the ground without the ball anywhere near the goal line.

But the play wasn't blown dead there, so let's jump ahead a few frames. 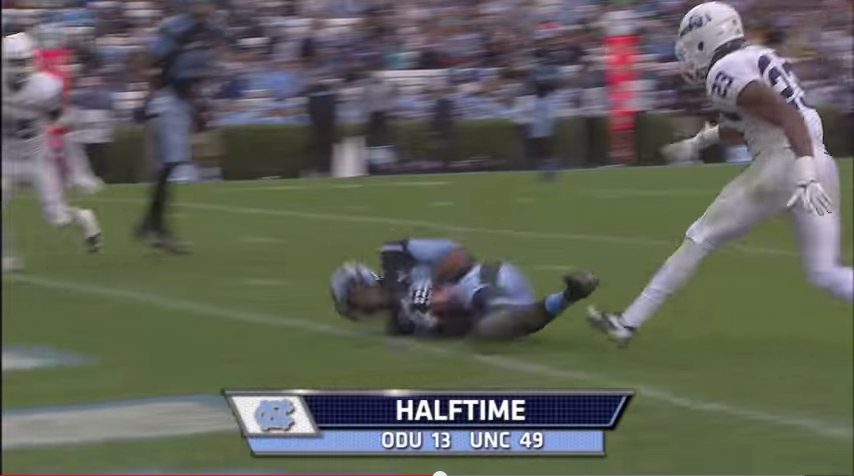 Surely that's a touchdown there, and the call is correct? Enhancements if you please, garcon.

Nope. That's his entire right side of his body down on the ground, and while he is closer than he was before, the ball still is not across the plane of the goal line at all, let alone in the end zone.

Now, I understand that this game was fugly all around, and at this point UNC likely would have punched it into the end zone a play or two later. That said, just because one team is blowing the other's doors off, and you've watched a 42-3 massacre just in the last 20 minutes of game time, doesn't mean you should slack off so bad you miss a call like this one.

This is not the NFL, there is no down by contact rule, and you cannot just roll into the end zone if you haven't been touched. So this kid was down twice before any fraction of his body or the ball broke the plane of the goal line, yet it was still ruled a touchdown.

So there you have it, Old Dominion fans. Were it not for this sloppy call, you might have... well, no, you probably still get your ass handed to you by the same final score, but at least nobody would have added insult to injury.