After 30 years with only updates to the facade, Paulson Stadium has finally been expanded.

Section K, row 38, seats 4-6. That's where I spent almost every fall Saturday possible between 1989 and 1995. Those were the years my family had season tickets to Georgia Southern football when I was growing up. Every Saturday morning in the fall when the Eagles played at home my brother and I were awoken by my father with the call of "Y'all get up if you're going with me."

I assure you there was no hesitation on our parts to get up for the two hour and forty-five minute drive from Griffin to Statesboro, GA. A car ride of that length meant McDonald's breakfast picked up in either Dublin or Metter. It meant listening to classic rock on the radio until Nate Hirsch came on with the pre-game show. It meant tailgating in the parking lot and the sounds of car horns when the team pulls into the stadium parking lot in those old yellow school buses. It meant Georgia Southern football in the Prettiest Little Stadium in America.

Allen E. Paulson Stadium opened on September 29th, 1984, when Georgia Southern hosted Liberty Baptist. The game ended with a 48-11 victory for the Eagles in what would be the first of many home victories. The Eagles boast a 176-33 (.842) record at home. Two 1-AA National Championships were won in front of the home crowd (1989 and 1990) with the 1989 crowd still being the largest crowd in the stadium's history at 25,725. To reach that number temporary stands were brought in behind the visiting stands and in the scoreboard endzone. 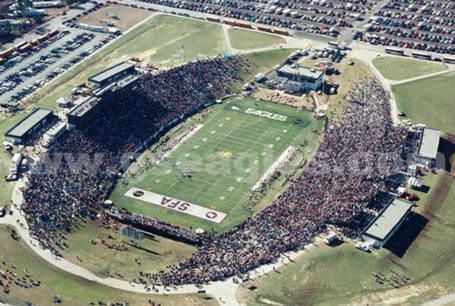 Aside from updating the concourses, adding brick work, replacing the scoreboard, and building a new field house, Paulson Stadium remained unchanged in its seating configuration from the time it was built until just prior to the 2013 football season. During that time capacity was listed at 18,000. In terms of actual seats, there were even less than that. Attendance still numbered above 18,000 for many home games, though. The grass seating ensured that a true sell out of Paulson Stadium was never really possible. 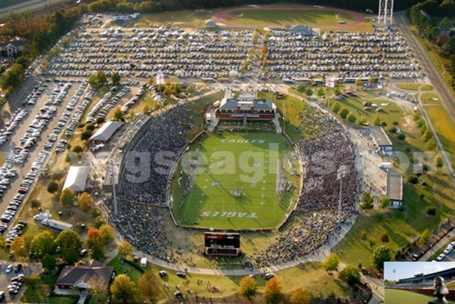 From there a mid-deck was added (with intention of a larger deck above it in the future) to complete the seating upgrades to Paulson Stadium. The seating capacity has been raised from 18,000 to 24,300.

A must read RT @GSAthletics_FB: Game Day at Paulson Stadium Brings a Host of Changes in 2014 http://t.co/n1rLBZjOF7 http://t.co/9fqwFyVMHt

While beautiful, there is a bit of sadness to be had as well. In the process of building the new deck, the top rows of the visiting stands were demolished and rebuilt. The seats that I called home and the section of wall I stood behind for every game during graduate school are now gone. It has been replaced with something better and the need for progress is more than understandable, but there is still a pang of regret at the loss.

During the 2013 football season, work  also began on the new Football Operations Center, a 50,000 square foot facility to house all things Eagle football. It was recently completed and a new HD video scoreboard added to give Georgia Southern a new big-time feel.

If you have ever been to a Georgia Southern football game, one of the familiar sites has always been young children throwing the football or playing underneath the scoreboard on the grass. I spent many of those Saturdays as a child there, myself. However, it was typically during half-time or when the game was well in hand. Unlike many children, I was there to see football, first. At first glance it would seem the construction of the Football Operations Center means the image of young children playing underneath the scoreboard is a thing of the past. You would be wrong.

Between the FOC and the playing field is what is being called the "Field of Dreams" where the sight of children pretending they're running into the endzone to Chris Blair's "Put an Eagle Six on it!" will still be seen on game day. A nod to tradition and the past.

28 + Hours away before kickoff at Paulson Stadium. Can't wait to see the Eagle Nation in full force! #GATA pic.twitter.com/VRVkCPyGZL

It's the stadium where I learned the game of football, often in the blistering south Georgia sun in the days before lights were put in place. It's the stadium where I first experienced the heart break of my team losing (Eastern Kentucky, 1990). It's the stadium where six national championship flags - won on the field in a true playoff - are proudly displayed. It's not a grand arena on the scale of Neyland, Bryant-Denny, The Horseshoe, or the Big House. It's rather small, actually, even after the expansion.

But it sure is pretty.

Hail Southern. And no place else.