It was a misty night in Statesboro, but the Eagles came up with the big win against long-time rival App State.

Share All sharing options for: Georgia Southern vs Appalachian State Review: A Beautiful Night in Statesboro

Thursday evening marked my first return trip to Statesboro in two years. This one ended much better, since my previous trip was during the 2012 loss to Appalachian State. When last I left Allen E. Paulson Stadium, the move up was still only being discussed. The stadium was still in its original configuration and looked tiny.

What a difference those two years have made.

Paulson Stadium was a strange, but beautiful, site walking up on Thursday. It really felt like a completely different stadium from the one I grew up in. Our seats were on the very top row on the fifty yard line next to the camera emplacement. What a view those seats offered! 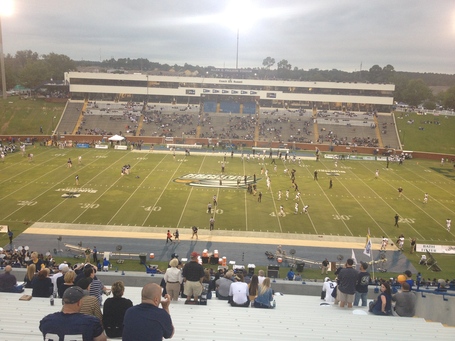 The game could not have gone much better. Even though it was a mid-week game for a team with a number of fans who live in Atlanta or in other places that would make mid-week games difficult to attend, Georgia Southern fans showed up in great numbers. I don't think the actual attendance was equal to the announced attendance, but it would not have been off by much. The home stands were mostly filled, and what I could see of the upper deck was mostly filled, as well.

The Ted Smith Family Football Operations Center is beautiful. Thanks to the awesome Rose Carter in the football office, I was able to walk around on the field immediately after the game and walked through some of the areas around the FOC. The Field of Dreams is a perfect nod to past traditions. Whomever had that idea deserves all the kudos in the world. It is truly something that will make Paulson Stadium unique and special.

If you're a Georgia Southern alumnus or fan who hasn't been back to Statesboro since the expansion, then you absolutely MUST go as soon as possible. It is truly an amazing site.

On to the Goods and Bads:

Matt Breida Doing Matt Breida Things. I said that last week in the South Alabama game, and then Breida went and did it again. On the Eagles' first drive, he busted loosed for another 50+ yard touchdown run. He is a true threat to take it to the house every single time he touches the football. He is going to be a whole lot of fun to watch over the next few seasons. Too early to start Matt Breida for Heisman campaigns?

QB Play. Kevin Ellison had 21 carries for 151 yards on the ground, and a pretty good night passing, as well. Favian Upshaw had 4 caries for 24 yards in his brief time. Both QBs threw the ball well. It's nice to have two QBs capable of running this offense. With how often they carry the football themselves, having two good ones can be the difference between success and serious struggle if one is hampered by injury at any point.

BJ Johnson. Opposing defenses seem to have keyed in on Kentrellis Showers after his fantastic performance in the first three games. All this has done is opened the door for BJ Johnson to show how good he is. He led the Eagles with 4 receptions for 42 yards and a touchdown.

The Defense. I've complained at times about the tendency for the Eagles' D to try to tackle with their shoulders rather than wrapping up, but they're still doing well overall this season. Even though the Mountaineers gained yards in the 3rd quarter, the defense stepped up and didn't allow App State to score a single point in the second half. They came away with two key interceptions, and held the Mountaineers to only 74 yards rushing. App State's yards gained on screen passes were typically due to broken tackles, as there was always an Eagle defender flying to the ball and ready to make the stop.

On another defensive note, Ryan George sacked Taylor Lamb to bring his total to a team-leading 3.5 on the year, while Jay Ellison added his second. Georgia Southern has 12 sacks so far this season, and George leads with 3.5. Seven Eagles are credited with at least half a sack so far this season through the first five games. I'll take that any day.

Shoulder Tackling. I mentioned this earlier, but it seems to me like the Eagles are trying to make tackles with big hits too often. This is looking through my admittedly uneducated eyes, but a lot of extra yards have been gained on plays that could have been stopped much shorter because opposing players have shed tackles.

Allowing Big Plays On Long Yardage Downs. It didn't happen much, but it's been a killer at times this season, when the Eagles allow the opposing team to gain big yards when they're way behind the chains. It was absolutely a killer vs Georgia Tech, and App State converted a few long yardage downs, as well.

Fan Behavior. Throwing those Eagle Head emblem discs on the field was disgusting. It was horrible the first time it happened, and it was even worse when it kept happening even after repeated announcements for the fans to cease. It wasn't just students, so it can't be blamed on drunk college kids. A very good friend of mine mentioned there were grown-ass men in the club seating throwing them. I knew from the first time it happened that it was going to take a penalty on the Eagles to get the fans to stop.

That type of thing is ridiculous and should never happen. Granted, it was a really bad idea to give those things out anyway in hindsight, but the fans should have known better. It was bad enough just to throw them on the field, but it appeared that many were aimed with the intent of hitting App State players and/or coaches.

I'm all for Paulson Stadium being an absolutely terrifying and intimidating place for opponents to play. However, that should never be because the opposing team fears the conduct of our fans directly affecting them. Noise level? Yes. The motivation our own players get from the intensity of the fans? Absolutely. But because fans may throw things at them? No. Absolutely not. No way, no how.

Also, I don't want Paulson Stadium to be a hostile place for opposing teams' fans to visit. Do we want to get big teams to agree to come to Statesboro like South Alabama was able to achieve with Mississippi State? Then we can't afford to have our fans doing stupid things like this. We don't want to be known for the horrible behavior of our fans, but for our level of support for our own team.

This Georgia Southern team has a ton of potential. Next week's trip to Las Cruces, NM will be a tough test due to the travel involved and the altitude, but the Eagles should be able to overcome those factors and handle New Mexico State. After that, the Eagles return home to face Idaho and then have a weekend off before the big match-up with Georgia State in the Georgia Dome. The march continues. We may not be bowl eligible barring some very unlikely circumstances, but a Sun Belt title is very much within the Eagles' grasp.