The Hugo Bowl: The Night the Lights Came On in Georgia

It has been 25 years since Georgia Southern played Middle Tennessee State in the game now known as The Hugo Bowl. This Thursday night will be the first Thursday home game at Paulson Stadium since that night.

Share All sharing options for: The Hugo Bowl: The Night the Lights Came On in Georgia

For some, watching games played in horrendous weather is fun. They enjoy watching the players get covered in mud, sliding on a field that worsens in condition as the rain continues to fall. On September 21st, 1989, Glenn Bryant Field at Allen E. Paulson Stadium took a deluge that would have made Noah start working a little faster and came away looking as if there had only been a soft spring rain.

Thursday night ESPN games are a staple of college football now, but in 1989 they were still a new thing. The game between Middle Tennessee State and Georgia Southern was to be one of the very first Thursday night college football games, and the people of Statesboro were thrilled at the exposure their football team would get from the experience.

Fans poured in by the hundreds just to watch crews place temporary lighting structures for a night game to be played. Erk Russell was a firm believer in Statesboro's heat being one of Georgia Southern's key home-field advantages. Therefore, there were no lights in place to allow games to be played at night. TV concerns were unheard of at the time, as there were still only a limited number of games on TV each weekend, so there was no need to provide lighting to make night games more attractive for TV purposes.

There was just one little problem: Hurricane Hugo was rolling in.

Thursday, September 25th, 2014 marks the first time since that rainy night twenty-five years ago that Georgia Southern will host a Thursday night football game. While Allen E. Paulson stadium has permanent light fixtures today, ESPN will reportedly once again be bringing in additional lighting to enhance the viewing quality for the High Definition ESPNU broadcast.

While there will not likely be a big crowd out to see ESPN set up for the broadcast, you can bet that the Eagles will bring a big crowd to the game. This is the Appalachian State game. Appalachian State is a rivalry that goes back to before Georgia Southern dropped football in the 1940s and grew into its current incarnation with the 1987 "Ice Bowl" playoff game in Boone, North Carolina. It's a familiar foe, and one Eagles fans are excited made the move to FBS with them.

Statesboro, GA sits about 50 miles northwest of Savannah and Georgia's Atlantic Coast. Hurricanes - especially major ones - are a rarity in the area. Georgia has not taken a direct hit from a Category 3 or greater storm in 116 years. In the first days of tracking and forecasting Hurricane Hugo, it looked as if that streak might have ended at 91 years. However, as Atlantic storms tend to do, Hugo's track moved northward, and it made landfall in Charleston, South Carolina as a Category 4 storm.

The decision to play the game was delayed until 3pm on game day. Erk Russell stated in his autobiography that he was in favor of moving the game because he felt a night game gave up too many of Georgia Southern's advantages, such as the South Georgia heat. ESPN's crews were considering delaying the game due to the level of preparation that would be needed with the temporary lighting structures involved. There were fears that the wind gusts would knock the structures down.

The decision was ultimately made to go forward with the game, and the result is one for the ages.

Perhaps you may remember the 2009 Auburn vs West Virginia game played in Auburn. That game was delayed due to storms that dropped 3.75 inches inches of rain in one hour. When the rains let up and the teams came out on the field, Pat Dye Field looked immaculate due to its intricately designed drainage system.

Hurricane Hugo dropped continuous rain on Glenn Bryant Field that was later measured at four inches. Glenn Bryant Field took the deluge and never blinked. The sidelines puddled to ankle deep in places, but the field itself looked near immaculate. Roger Inman, former Facilities Manager and current Athletic Facilities Consultant since his retirement, said that "the field was like a Timex. It took the rain and play and never puddled within the field of play."

What makes up this field that can take such a beating? According to Inman, "the field at the time had an 18 inch crown [height from midfield to sideline] with a base of Georgia red clay. A matrix of drain tile was put in the clay and backfield with 89 stone. Then 12 feet of rock was placed on top of the tile, and twelve inches of high perk rate sand similar to the mix for PGA greens was put on top of the rock."*

Georgia Southern forced seven turnovers during the game and Georgia Southern kicker Mike Dowis somehow kicked four field goals in the swirling wind and rain on the way to a 26-0 victory. Erk would later say that he thinks his team could have beaten anyone who came into that stadium to play the Eagles that night. The team was just that ready and excited to play.

The crowd was right there with them. The announced attendance was just under capacity. Photos from late in the game show that many left before the official end, but Allen E. Paulson Stadium was near filled at the kickoff. 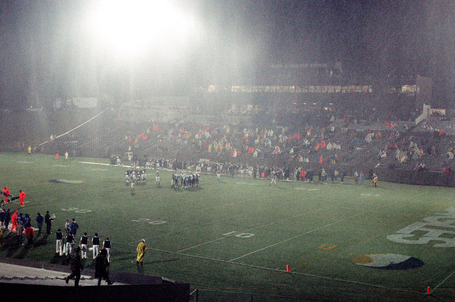 There were stories immediately afterwards that many from Middle Tennessee State insisted the results of the game would have been different if the weather had not been a factor. They had the chance to prove it in the playoffs later that season.

The results? A 45-3 Georgia Southern victory.

Sadly, I know of three season ticket holders who were not in attendance that night. My father did not want my brother and I (10 and 7 at the time, respectively) to miss two days of school. It is the only home game I did not attend in 1989. I don't know that the weather didn't also play a part, but we have been to many rain-soaked games (and even one with sleet later that season in the playoffs), so I will give him the benefit of the doubt that school was the actual reason.

I still have the VHS recording made from the broadcast that night at my parents' house. It is still amazing to look back on that game and what occurred. There are images from it that I can still clearly see in my head. Erk Russell standing in the rain with water running off his bald head. Georgia Southern cheerleaders with huge smiles leading cheers while wearing ponchos. Rain pouring out of drainages holes in the stands as if the concrete were a damn near to bursting. It is one of those games that defines Georgia Southern football.

Thursday night, ESPN will return to Statesboro for the first major regular-season broadcast of a home football game since the Huge Bowl. Paulson Stadium looks a good bit different today than it did, then. Some things never change, though. They should move through before gametime, but there is a chance of rain and thunderstorms in the forecast for the 25th. It would only be fitting to play this one just like the last one: drenching wet with a pumped up Georgia Southern crowd. And an Eagle victory.