What can North Texas's new quarterback bring to the offense?

Share All sharing options for: Why Dajon Williams and the zone read can bring new life to the Mean Green offense

I think it hit me on the final scoring drive of the first half: this kid can be incredible.

North Texas was at its own 38 on second and 10. Dajon Williams, already impressing everyone with his fluid running and pretty passing, took the snap and ran the zone read, taking a couple steps with his running back while his eyes took in the Nicholls State defense.

It was only a few split seconds, but his eyes picked up what he was looking for. He pulled the ball back, tucked it under his right arm and turned towards the line. The middle, open briefly, quickly closed off, but there was plenty of room around the edge. Williams turned the corner and picked up a seam. It was only going to take him 10 yards, I remember thinking, because Nicholls State had defenders flanking him about ten yards upfield, but I figured it'd at least be enough to pick up a first down.

And then Dajon outran them like they weren't even there.

Sure, a defensive back ran him down -- 55 yards later. It didn't matter. Dajon finished off the drive with a touchdown pass, and I finished off whatever doubt I had about this redshirt freshmen who couldn't beat out Josh Greer for an opening day nod at quarterback. This kid can be incredible.

But it's also important to temper our expectations. Right now, it's not what Dajon Williams can become, but what he is right now. Armed with the zone read against Nicholls State, Williams scored five combined touchdowns as his team cruised to a 77-3 win last Saturday. Let's talk about what that play does and why it was so effective for the Mean Green over the weekend.

If you've been around college football for any time at all, you've heard the term. The zone read is increasingly popular in college football today, mostly because it gives a chance for hyper-athletic quarterbacks to take advantage of defenses nowhere near as fast, quick or elusive.

A zone read has the option of two runners taking the ball. In the play below, it's either Reggie Pegram running a sweep to the right or Dajon Williams keeping the ball up the middle, and the responsibility is on Williams to determine which is the right play.

You'll notice Dajon really wait this play out, moving with Pegram for a step or two. It's exactly what he's supposed to do, waiting patiently and giving himself an extra split second or two to make the proper read and decide what to do with the ball. Give him credit -- patience isn't the easiest thing to come by on a football field with 21 other players flying around looking to hit each other, especially for a freshman making his first start ever.

In most zone reads, the quarterback is reading the outside defensive end. If that player crashes or blitzes towards the quarterback, the running back gets the ball. If he stays down in a "contain" position, the quarterback keeps it and takes it right up the middle. 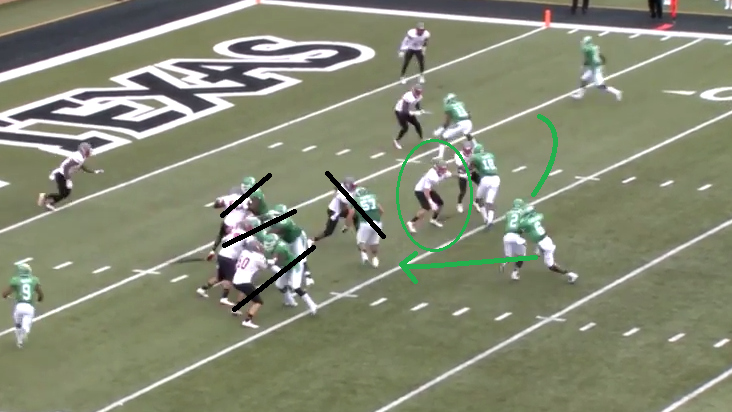 In the still above, the defensive end circled in green is the one that Dajon is reading. He's in good contain position and is in the position to make the play if Pegram gets the ball, so Williams pulls the ball back and takes it himself right up the middle. As you see, North Texas has a body on every defender and the rest is simple.

The other thing to notice, if you'll scroll back up to the gif, is the Nicholls State linebacker that Mean Green no. 57 -- Mason Y'Barbo -- blocks. If he had stayed in the middle, he would have had a chance to muck up the lane that Williams runs through, but because he blitzes hard and goes above Y'Barbo attacking the running back, Dajon gets the red carpet treatment right into the end zone.

Got it? It's worth noting that not every running play out of a shotgun formation will be a zone read with Dajon as quarterback. Below is an example of a called run the entire way where Dajon doesn't even glance at the defense until the ball is already in Pegram's hands. The zone read is a weapon, but it's also just a play. It won't become the entirety of an offense.

That's cool I guess, but how will it help North Texas score touchdowns?

Head coach Dan McCarney and offensive coordinator Mike Canales are both run-first guys, and while Dajon may not fit the prototypical mold of a smart decision-making, low-turnover pocket passer, he'll help improve the run just by being in the pocket. Take this play, for instances. 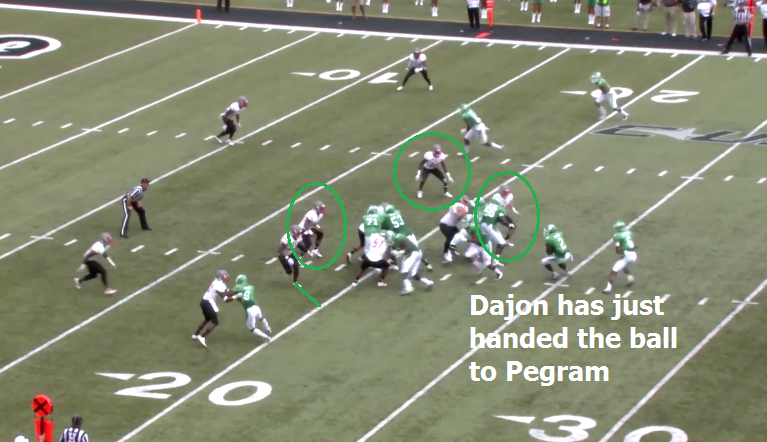 This is the Mean Green's third offensive drive. Nicholls State still clearly remembers the goal line play we looked at above, and because they now fear Dajon's ability to run, he's able to freeze their defense on a simple handoff.

In the play above, Pegram has the football and is already starting to make his cut in the backfield, yet, as you can see, three of the defenders haven't left their stances to attack the football because they have to make sure which one is running the ball. You can see a single linebacker making the proper read, but with a Mean Green blocker in front of him, Pegram's still goes on to pick up an easy 14 yards.

Will the threat of Dajon's legs freeze three Indiana defenders? No, that's pretty unlikely -- Nicholls State was a very weak team in many areas. But sometimes, a split second of hesitation on defense is all it takes for a running back to make it through a hole on defense and break a big play.

In this play, Nicholls State never stood a chance. UNT put seven on the line and they absolutely demolished the opposing front seven. When the gif pauses, it's pretty obvious that it doesn't matter what decision Dajon makes -- whether he hands it off or keeps it, it's a Mean Green touchdown.

I love this play, though, because it clearly shows Williams is running the zone read correctly. He's not looking to see whether he has room to run or deciding to "get his" simply because he can; he's just making the simple read of "is there a lane for my running back." That's what the zone read is set up to do and that's all he does here.

What else can you do off a zone read?

Right now, the Mean Green are sticking with the basics -- the runner will dive into the line or sweep across a formation, and the quarterback will do the opposite if he keeps it.

But as the North Texas offense feels more comfortable with Williams at the helm, there's more and more wrinkles they can begin to add in. Against Nicholls State, Canales called several end-arounds to get Carlos Harris the ball in space, and there's plenty of room to experiment with plays like that.

Want a true "triple option" out of a zone read? Instead of an end-around, the Mean Green could motion Harris (or Kidsy, or Jimmerson, or whoever) into the backfield before the snap. The ball can go to the running back up the middle, of course, but if Williams keeps it running wide on the formation, then Harris stays five feet outside him able to receive a pitch. I'm starting to get way out of my comfort zone of explaining football, but you can read more about it here if you'd like.

Is Dajon more than just a zone read guy?

We can hope. He's completed 16 of his 21 passing attempts this season and shown good touch on his passes, but will face his first real test against a much stronger Indiana defense.

Not much to analyze for those gifs, so just sit back and enjoy having a quarterback who's a threat to throw or run for 20 yards on any given play.

Dajon will have rough moments coming up this season. We don't know when, or how many, or how severe, but things won't go right for him all the time, and that's okay. He's had one career start. He won't be a senior until 2017. He hasn't even played a combined four quarters of football yet!

But we'll live through the missed throws or bad plays, because sometimes, without warning, Dajon Williams will outrun an entire defense and it'll all be worth.