Football and Family: A Reflection on the Georgia Southern vs Georgia Tech Game

I struggled with exactly how to write this and where to present it. It was originally going to be a part of my game review, but then I decided it deserved its own post. I just felt like telling a little bit more on what this particular game meant to me.

Share All sharing options for: Football and Family: A Reflection on the Georgia Southern vs Georgia Tech Game

Through the magic of the internet, I've been able to determine that the first time I ever visited Bobby Dodd Stadium at Historic Grant Field with my uncle Wayne was Thursday, October 10th, 1992. I do not remember the score being so close, but I do remember that it was a Thursday night game against Maryland and that the Yellow Jackets won.

I've attended a number of Georgia Tech games since that first visit with my uncle, Wayne Austin, a Vietnam Veteran of the 1968 Tet Offensive and 1970 graduate in Industrial Engineering from the Georgia Institute of Technology. More often than not, the outcomes did not go Georgia Tech's way; the last game I attended with him was the 2011 Thursday night game against Virginia Tech, along with one of my Army buddies who is a VT graduate.

My Uncle Wayne has held season tickets to Georgia Tech football for years. His first tickets were in the upper deck of the home side, but for at least the last decade, his seats were in Section 4, Row 22, Seats 12-16.

He always got an extra seat because he liked the extra room it provided.

He always parked in the same parking garage near The Varsity, and always had a pre-game meal standing outside The Varsity before crossing the North Avenue Bridge over I-75/85 to go into the stadium.

It's a ritual that I've been through with him numerous times. If we didn't ride with him and my Aunt Linda to the game, we always met up with them at The Varsity.

There are numerous universities covered in my family with graduates from Auburn, Georgia Southern, Georgia Tech, Georgia, Alabama, and Oregon State just to name a few. Georgia Southern has played each of those teams (yes, even Oregon State, almost defeating them in Corvallis in 1999) in their history. All but one.

To say I had been looking forward to this game for a while would be an understatement. I can remember discussing Paul Johnson and triple option football with my uncle when PJ took over as the head coach at Georgia Tech. I latched on to that since at the time Georgia Southern had moved away from the triple option and was running an Air Raid scheme under Chris Hatcher.

When the Georgia Southern/Georgia Tech game was announced a few years back, I couldn't wait for it to come around. Especially since Georgia Southern's head coach then was Jeff Monken, a long-time PJ assistant at Georgia Southern, Navy, and Georgia Tech. Triple option football returned - after a brief hiatus - to the place where Paul Johnson created his version of it as offensive coordinator under legendary coach Erk Russell.

For the first time, we were going to get to discuss an upcoming game between my father's and uncle's alma maters. Georgia Southern vs Georgia Tech. We would be able to discuss which team ran it better and just enjoy another added thing to discuss when the family got together.

Football has been a constant in our family. With so many schools represented, every family gathering contained some form of football discussion at some point. Sometimes it would get heated. Most times it wouldn't.

Football was just one of the glues that holds ours - and many other Southern families - together. Over time, these discussions and arguments get old and stale. With the announcement of this game, we would have something new to talk about!

My uncle didn't attend this Saturday's game with us.

For the first time in a few decades, my Uncle Wayne does not have season tickets to Georgia Tech football.

I can't even say with any certainty that my uncle knows it is football season right now.

My Uncle Wayne was recently diagnosed with Lewy Body Dementia, a very aggressive form of the disease.

It is hard enough for me, as a nephew, to have watched my uncle slip into dementia over the past two years. It has increased rapidly over the past few months to the point that my uncle - who has spent years traveling the world as an engineer and holds patents on chicken processing equipment used in more countries than I can remember - struggles to recognize his wife of over fifty years and his own daughters. I cannot even begin to imagine their pain.

To say this past Saturday's game was bittersweet would be putting it mildly.

I insisted on still going to the Varsity to get food before going into the stadium. It was a struggle to maintain my composure standing there in that familiar spot outside in the drive-in area. I couldn't help but think back to the last time I was there with him before that Virginia Tech game. There were signs even then, though they were very small and I did not recognize them until much later while looking back.

The game was more exciting than I believed would be possible. The ending was controversial in many ways and I know it would have sparked years' worth of arguments and discussions amongst us all as we hashed out the game. I'm not one who typically enjoys that aspect of football, but it's incredibly saddening that I'm not going to get to experience that with him.

Before the stadium filled, I looked across the stadium to my uncle's former seats. The gold-colored reserved seat cushions were not covering his spot as they were when he held season tickets, so I don't know if someone else holds that spot now, or if they have reverted to single-game purchase. I do know they were filled during the game. I wish I could have gone over there and spoken to the people sitting in them.

Following the game, my father went to go visit his brother. I'm sure he told him all about the game.

If you ever go to a Georgia Tech game and end up in Section 4, Row 22, seats 12-16, then I want you to know about their previous occupant.

I want you to know about the loving family man who sat there for so many years.

I want you to know he is a man who loved Georgia Tech football and never missed a game unless he absolutely had to. He is a Vietnam Veteran who spent years as a member of the Military Order of the World Wars chapter in Atlanta.

He may not attend any more Georgia Tech football games, but I know he still loves the White and Gold. He put his Georgia Tech education to good use for over forty years. He may not be able to use it anymore, but I can tell you one thing with absolute certainty.

He was a hell of an engineer. 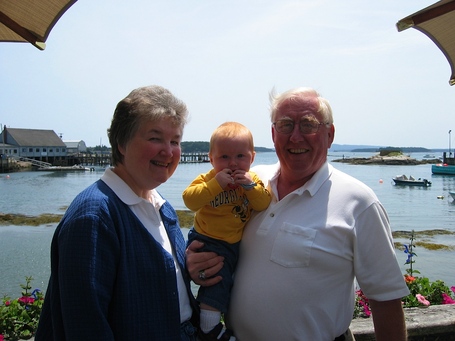 (My Aunt Linda and Uncle Wayne with their grandson Cal, somewhere around nine years ago)