Two big plays in the first quarter of the Warhawks win over Idaho last week are perfect representations of what Todd Berry is trying to do on offense. Let's take a closer look.

Share All sharing options for: Film Study: How ULM uses the whole field

Todd Berry is one of the most respected playcallers in college football. The first thing that comes to mind when most college football fans hear that name is the two quarterback package from a few years ago, but Berry's genius goes beyond a few isolated scenarios. He is consistently able to find mismatches and get his skill players in high leverage situations.

On Saturday his Warhawks got off to a 21-7 lead after one quarter, and the two big plays that spurred the offense early on both exemplify his philosophy perfectly.

This play comes directly after Centarius Donald runs for a first down out of the same formation. ULM shifted from a different formation pre-snap, so Berry got a chance to see how Idaho responded to the formation. They scrambled to get the right receivers covered, and it was clear that there was a personnel mismatch with three linebackers on the field. The Warhawks hurry up back to the line, get a call from the sidelines, and get set. 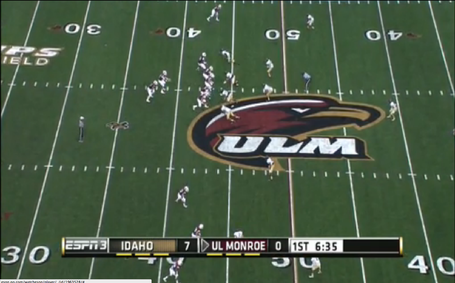 With the ball on the left hash, the Warhawks have three receivers outside of the right hash. Idaho responds with walking a linebacker out about halfway between Holley (the closest receiver to the right hash) and the offensive line. They bring a safety down to cover Alec Osbourne and, depending on what happens post-snap, maybe jam him on the line. This means that the only deep defender is the other safety in the deep middle of the field. 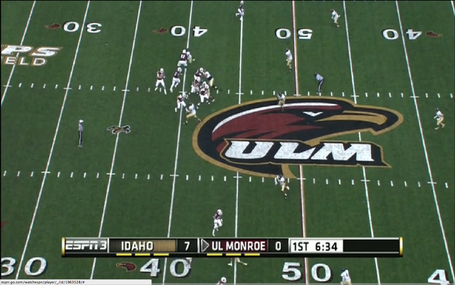 Post-snap, Pete Thomas fakes a quick pass to Osbourne and everyone on the Vandals defense bites on it (especially that edge linebacker). Holley takes a few steps like he's going to block the safety, then turns upfield. 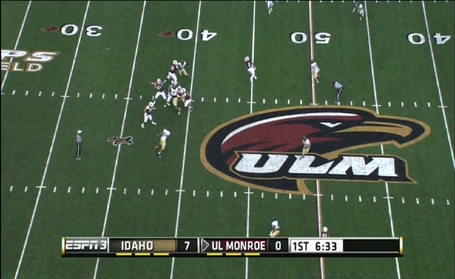 Here, you can see the result of the fake. Holley finds the soft spot in the coverage, right behind the linebackers and in front of the safety (who is just outside the screenshot). The line also gives Thomas enough time to execute the fake, look downfield, and find his receiver. 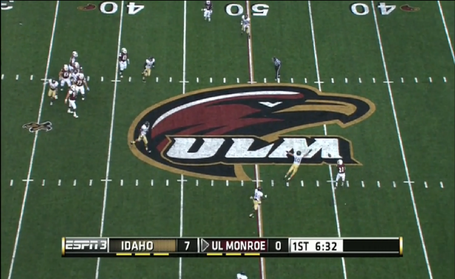 Thomas throws a perfect ball to Holley, where he can catch and run. All that's left is to outrun the secondary. On this particular play, Holley was able to beat the safety and looked to score, but the playside cornerback took a good angle and caught him at the two yardline.

After a rain delay of more than two hours, the first quarter is finally almost over and the Warhawks are driving again. They have been using a formation like this (both with and without the unbalanced look) a lot and have had some success. They've also shifted out of this formation to give a more spread out look with four wide receivers. 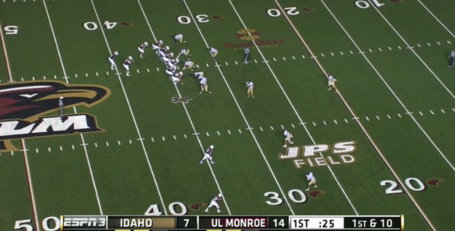 Here, the Vandals are just outmanned on the left side of the offensive formation. They've got four defenders (including the nose tackle who is shaded to the right) against five potential blockers, not including Donald in the backfield. The two receivers at the bottom stretch out the defense and give the threat of a deep pass, so they can't overcommit to the strong side (FWIW, the Vandals are still misaligned; they should never be that outmanned. Berry recognized it earlier in the game and went back to the formation here to exploit it). 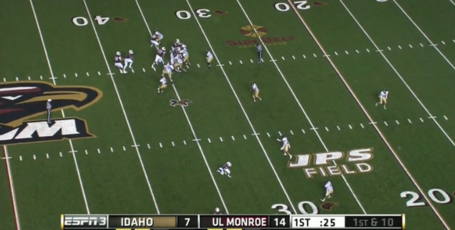 This part's pretty simple. ULM runs a basic power play, pulling a guard to lead the way for Donald. The edge rushers on the backside have to hesitate just a bit in case Thomas pulls, which means they won't be able to catch up to Donald even though they're left unblocked. The receivers at the bottom fake a quick screen pass, which doesn't seem like much but ends up being fairly important. Their action holds the defensive backs where they are for long enough that they can't take a good angle to end up catching Donald before he hits the endzone. 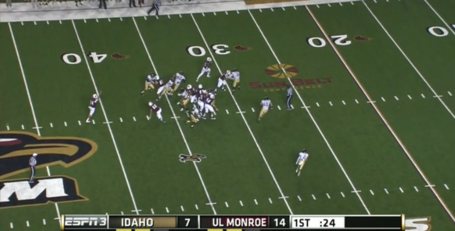 The result: Donald goes untouched on his way to the endzone. Even the deep safety (go back and look where he was aligned pre-snap) doesn't get close to him. The line executes their blocks perfectly (especially Ben Risenhoover, the pulling guard), opening a tremendous hole for Donald to run through (although he could've probably just jogged).

If the Warhawks have any chance against LSU this weekend, Berry has to call a perfect game. LSU has the athletes to match up with every one of the ULM offensive players, and John Chavis is sort of good at his job. But exploiting mismatches doesn't just have to mean "my athlete is better than your athlete, so we're gonna throw it to him in single coverage." Berry is an excellent in-game coach who will find where the weaknesses in a defense lies and take full advantage.