Can John Thompson's shift from a reactive secondary to an aggressive, blitz-heavy defense pay off for Texas State?

Share All sharing options for: Texas State Will Be Aggressive Under New Defensive Coordinator John Thompson

Former defensive coordinator Craig Naivar took the special teams and safeties coordinator position at Kentucky in mid-March, throwing the future of the Texas State "Doom Squad" defense into question. Head Coach Dennis Franchione and the Bobcats responded by plucking former Arkansas State defensive coordinator from the fallout over the fourth head coaching change in just as many years in Jonesboro.

Naivar: An Emphasis on Containment

Given that last year's defensive line was occasionally able to generate a pass rush (at least in comparison to 2012) and that the safeties and corners were often able to prevent big plays against opponents of a similar talent level, setting up in a 4-2-5 and dropping off into coverage usually made sense as a strategy. However, opponents exploited the umbrella by often passing underneath for short to medium range (think 8 to 15 yard) routes to nickle and dime the Bobcats down the field.

Texas State would also occasionally use an alternative 3-3-5 look to use the potent linebacker combination of Mike Orakpo, David Mayo, and now departed senior Damion McMiller. They'd put the linebackers up on the line to try and force the opposing offensive line into changing their protection or run blocking schemes to account for a potential blitz, and then either fire away or back off in coverage based on the play call and/or read of the situation. Mike Orakpo would also occasionally play up on the line as a standup linebacker to provide pass rush capabilities.

Naivar would occasionally give 8, 9, or even 10 yard cushions to receivers pre-snap, especially on 3rd and long. 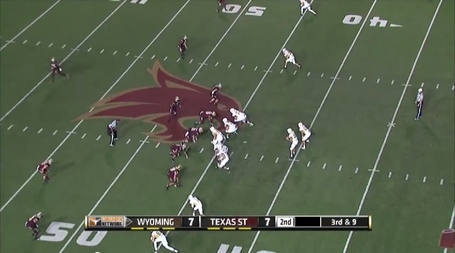 On this play in particular he would put linebackers Mayo and McMiller up against the defensive ends and let Orakpo patrol the short to medium range of the middle of the field on his own.

Thompson: Multiple Looks and Aggression With All Positions

Thompson runs a 4-2-5 base scheme like Naivar, and he'll likely continue to use some 3-3-5 plays and put Orakpo up on the line as a hybrid defensive end/linebacker, but that's where the similarities will likely end. He takes a more aggressive approach than Naivar; instead of using just the linebackers to confuse the opposing offensive line he'll often bring in corners or the rover close to the line to either commit or bluff on the blitz. This blitz package worked to perfection against Louisiana and Ball State in ASU's bowl game and is very different from Naivar's pre-snap looks. The Ball State play in particular is a perfect example because it was also in a third and long situation.

Eight players are within a five yard buffer from the line of scrimmage, meaning outside DB Artez Brown is free to jam coverage or provide run support and everyone in and around the line can shift around to cause confusion for the offense. 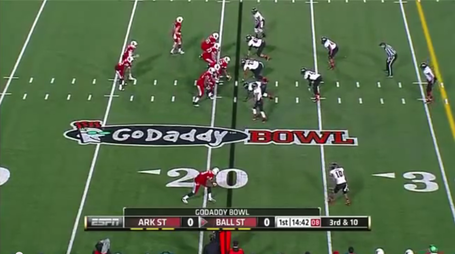 Notice how the left defensive end, cornerback, and linebacker crowd the left side of the formation at the last second. That strategy works perfectly in this case as the slide protection goes the wrong way as the other corner drops off into coverage. The Ball State running back then completely misses his block to give the blitzing cornerback and linebacker a clear path to the quarterback. 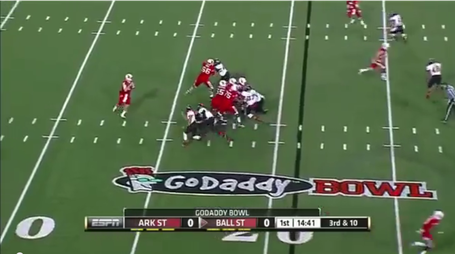 Moving from the umbrella secondary to a consistently aggressive approach should make for more entertaining viewing, but will it work with Texas State's personnel? Given that the Bobcats have a completely green defensive line, it's safe to assume that part or all the strong linebacking corps will be rushed early and often under Thompson's blitzing strategies.

Committing Orakpo and/or Mayo to the blitz will put quite a bit of strain on a secondary that was also impacted heavily by graduation, and that's where the aggressive approach gets risky. Hence, the need for the defensive line to develop into a serviceable unit at rapid speed. If they don't, Craig Mager, Colby Targun and company could have their hands full in the back.

Jekyll and Hyde Performances to Come?

One of the concerns with last year's defensive unit at Arkansas State was that they were vulnerable to giving up big plays to teams of various stature, including a busted coverage to Texas State's Terrence Franks. The ASU defense also laid a couple of stinkers against some objectively awful competition. Giving up 505 yards and 31 points to a 3-9 Memphis team as well as 33 points and 432 yards to the worst team in FBS is somewhat baffling no matter what injuries or personnel gaps Thompson faced at ASU.

On the flip side, ASU held Kolton Browning and ULM to 14 points, South Alabama's dangerous offense to 16 points, Ball State's prolific attack to 20 points, and Louisiana's chainsaw of a spread offense to 23 points, so it's not as if the defensive unit under Thompson was inept. Unlike ASU last year, Texas State can't afford inconsistent performances if they want to make a bowl since there's a smaller margin for error as the defensive linemen and secondary undergo a quick maturation process.

Combining a hair on fire, fly to the ball defensive approach and an up tempo offensive attack should be great for the fans to watch, but will these changes lead to more wins and a bowl game? Bobcat fans should get a taste come Saturday against a very confident Arkansas-Pine Bluff squad.