Share All sharing options for: What Texas State has Done Right--and Wrong--In Their Move to FBS

Texas State's road to becoming the next Boise State or South Florida hasn't always gone as planned, but things certainly could have been much worse. As year 3 of FBS play begins for Texas State in less than a week, we'll look at the successes and missed opportunities Dennis Franchione and the Bobcats have experienced while attempting to build a respectable FBS program.

The main storyline on ESPN about Texas State's 30-13 romp in Houston may have been about the Cougars' fall from grace as a former Top 25 program, and it's true that Houston turned out to not be all that good in 2012. However, at the time it was a monumental first step towards building clout at the FBS level for Texas State.

Downtown San Marcos was jumping, fan engagement was at an all time high and the national media took notice. Opposing coaches and programs were sent a message -- Texas State was not going to lay down and be UMASS.

Orakpo is now the recognizable face of the Bobcat program and is a game changer for the defense, as previously mentioned. DJ Yendrey, a TCU transfer, also was able to make big plays as a defensive lineman on last year's "Doom Squad" defense when healthy.

Texas A&M transfer Michael Ebbitt was a beast for the defensive line in Texas State's 2011 FCS transitional year as he far and away led the team in sacks and tackles for loss with 11.5 and 15.5, respectively. Without these three, the process of building a viable FBS program would've been much bumpier.

While in FCS Texas State first put in a new end zone complex in 2002 and then upgraded their press box in 2009 to include suites and club seats. Bobcat Stadium looks great since the 2012 renovation to the north side complex and is one of the better facilities in the Sun Belt.

Texas State then took their facilities to a new level with a major locker room overhaul this summer, which should help in the ever ongoing war for Texas high school football recruits.

Losing to the Roadrunners in the second year of their existence for the inaugural I-35 rivalry game was quite possibly the biggest black mark on Dennis Franchione's resume at Texas State. UTSA has done an admirable job of building up an FBS program at lightning speed, and that loss put Texas State behind their rivals in local perception.

To add insult to injury, Texas State has to wait until 2017 for a shot at revenge at their neighbors, and UTSA ended up in a conference with arguably more exposure and more bowl tie-ins.

2. Lack of outreach to the San Antonio market

Before UTSA football was even a gleam in Larry Coker's eye, Texas State was the one Division 1 football program within an hour's drive of the San Antonio metro. The Alamo city thus represented the one opportunity for Texas State to expand its brand name and gain a toehold in the region, which makes it all the more puzzling that there was minimal outreach to the San Antonio media and that playing the occasional home game in the Alamodome wasn't ever considered as a serious option.

UTSA then locked down the San Antonio media in 2012, and Texas State football is now stuck in a no man's land between two major markets that will only give them secondary levels of coverage until they win big.

3. Faceplanting against Texas Tech in the 2012 FBS home opener

In a perfect world there'd be little shame in a first year FBS program getting beaten up by a top 40 Big 12 team, even at home. However, coming off what was then a massive upset over Houston, Bobcat fans' expectations were massively inflated. A sellout was guaranteed and San Marcos experienced a gameday atmosphere like never before.

Traffic was snarled, trash was talked, many (many) drinks were had, and a pop-up tent next to the tailgating spot of your intrepid author went up in flames. Said tent would end up being sadly symbolic of the Bobcats' upset hopes that day. 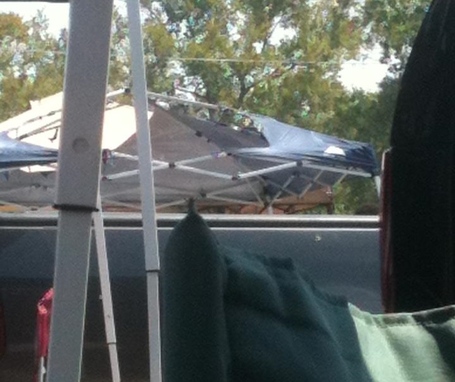 Putting a grill under one's tent is the fan's equivalent of throwing into triple coverage. Photo provided by Alexandra Sweat.

The game started out well enough for Texas State. Tech gave the ball away on a botched end around, and the Bobcats drove inside the Red Raider 30 yard line. Disaster struck quickly, however, as Shaun Rutherford made an awful read for a pick six, and the raucous atmosphere immediately left the stadium. Texas Tech then poured gasoline on the fire, the Bobcat resistance went up in smoke, and the rest was history.

Casual fan and national media interest dissipated. After a sellout attendance of 33,000, next week's game against SFA saw 17,188 fans show up. Against Nevada: 14,210. Bobcat supporters expecting a win over Tech were overconfident, but if Texas State had put up more of a fight then fewer fans probably would've jumped ship.

What do you think Texas State did right and wrong in their move up to FBS? Leave a comment below.