The Past Missteps of Memphis Football And The Here and Now

After years of blunders, the future is starting to look bright for Tiger football

Share All sharing options for: The Past Missteps of Memphis Football And The Here and Now

Those were the words I delivered to my friend Cassie in the fall of 2011 as the University of Memphis was plodding their way through another football season in the Bluff City under Larry Porter, who was in what would be his final season as head coach.

While I was familiar with Porter and what he did at LSU, recruiting standouts such as Joseph Addai and nabbing Recruiter of the Year, there was nothing that screamed head coaching potential from him.

That is, if you're a functionally competent university, something that for all intents and purposes, the University of Memphis never was  when it came to football.

As a way to introduce myself to you guys here at Underdog Dynasty, I'm going to give three past missteps the University of Memphis made with their football program as well as the here and now in the Bluff City with Tiger football.

1. Failing to build on key moments and once in a lifetime players

Being an LSU fan, I know the story behind the push for the Maravich Assembly Center.

Prior to the arrival of Pistol Pete in Baton Rouge, season tickets for basketball averaged around 40 (this isn't a misprint). As soon as Maravich began to take the college basketball world by storm, LSU officials got the green light to build the new arena for hoops, which came a year after Maravich left Baton Rouge.

Another example would be Louisville's victory over Alabama in the 1991 Fiesta Bowl. Despite the fact Alabama wasn't the Alabama we know today, that one victory set the wheels in motion for the modern Louisville football program. By 1998, the Cardinals would be playing in a brand new on-campus stadium.

So what does this have to do with Memphis football you ask?

Twice in the last 20 years, Memphis officials had a chance to capitalize with their football program and failed, the first being the historic 1996 victory over Tennessee and the other being the DeAngelo Williams era. Although Williams never led Memphis to a Conference USA championship, his presence at the school pumped energy into program.

The problem, however, was that the school was too foolish to take advantage of what DeAngelo did for the school and pump resources into football related projects.

So while peer schools like Cincinnati and the aforementioned University of Louisville got renewed commitment to football from their respective administrations, Memphis got left behind in the dust until they realized that basketball, not football, was hurting the bottom line for the athletic department at large. And when they realized that, it was too late.

2. Failing to honor their history

Despite the fact that the Superdome is owned by the state of Louisiana and what not, if you take in a Saints game or what not, you're going to see banners reflecting Tulane's SEC championships as well as their 1998 Conference USA championship.

In fact, when Champions Square opened in 2010, months after the Saints' Super Bowl win, the powers that be in the Crescent City made sure that Tulane's 1998 championship season would be included in the area, something that can be seen in this picture on the lower left of Drew Brees hoisting the Lombardi Trophy and right below the advertisement for Mercedes Benz. 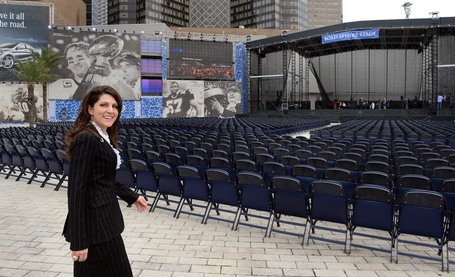 In the case of the University of Memphis, who has played football at city-owned Liberty Bowl Memorial Stadium since 1965, there's only one visible mention of the program's past, a plaque devoted to former Tiger coach Rex Dockery, for whom the playing surface is named for, who was killed in a plane crash in 1983 along with player Charles Greenhill and assistant Chris Faros.

There's no mention of guys like John Bramlett, Gerald Arnold, Steve Matthews, Bill Crumby (whose nephew was also a Tiger) or even of a future Hall of Famer in Issac Bruce, probably the greatest player in program history.

According to an article written by Frank Murtaugh in 2007, the many loopholes of the city has prevented the school from putting banners of honored players up. In fact, even the honoring of Dockery was one based on emotion, not history.

"A group of his friends just went to the City Council and basically said 'Let's do something to honor him'. There was no type of procedure or anything."

Although Memphis doesn't have the history that other places have in football, the fact of the matter is that in some people's minds, football wasn't played here before DeAngelo Williams, which rehashes my comment of the school not playing football to my friend from 2011.

Before Mack Brown recruited guys like Johnny Manziel as safeties, he served on the staff at what was then known as Memphis State University. After the death of Dockery, Brown was one of two finalists for the vacant position, the other being Ray Dempsey of Southern Illinois. Instead of going with a person that was familiar with the program and city, Dempsey gets the job over Brown, who went on to take three different schools to bowl games as well as win the BCS title in 2005 at Texas.

Nearly 30 years later after the firing of Tommy West, who stayed three years too long, Memphis had a choice between Hugh Freeze, Rick Stockstill and the aforementioned Porter. While Freeze ended up at Arkansas State and later on Ole Miss, Stockstill, who I had the pleasure of interviewing in May of last year, was denied the job largely in part to him wanting to coach Middle Tennessee in the 2009 New Orleans Bowl before coming to the Bluff City, only leaving Porter, who accepted the school's offer and had a tenure that made Turner Gill's in Kansas look like Bear Bryant's in Tuscaloosa, only garnering one Conference USA win in two years, which was by the way a win over an interim head coach at Tulane.

The Here and Now

As opposed to the past, for the first time in my basic lifetime, the university has an athletic director and president that wants to commit to not only basketball, but all sports including football.

More importantly, Justin Fuente, who I once said to the infamous "Mac B From Tennessee" could be the second coming of Gary Patterson at TCU, has instilled hope and discipline into this program.

Along with that, here in Memphis the construction of an indoor practice facility for football is taking place, something that had been pushed for by past coaches. Part of the "Vision For Victory" campaign that was started in 2011, you can learn more about the project by looking at this video.

Expected to open in 2015, the indoor facility is supposed to cost in upwards of $20 million as the school pushes to put their entire athletic department on the Park Avenue campus, including men's basketball.

But for now, as donations continue to pile in for football, the first thing on the agenda for this program should be to win.