The Vandals are going on 20 years of their experiment in top-level college football and results haven't been pretty. The Sun Belt Conference has presented Idaho with its last opportunity to prove it can belong.

Share All sharing options for: Idaho's Entrance Into The Sun Belt Is About Believing It Belongs In FBS

It's a wall I call the wall of Big Sky Conference triumph. The wall features team portraits flashing back to a better time in Idaho history. It's one of the few places on Earth where John L. Smith smiles at you in a non-senile way. Multiple team portraits of Idaho teams that throughout the 80's and 90's dominated the landscape of Big Sky football and regularly landed themselves in the national Division I-AA quarterfinals.

On the adjacent wall and in trophy cases hanging from other walls are portraits, jerseys, signed footballs and other memorabilia mostly involving players and coaches who you've probably heard of, but we'll get back to that. My favorite thing about this place on the table by the main entrance. The H-Bowl table. Enclosed in hard plastic are multiple newspaper clippings commemorating Idaho's greatest triumph of the recent era.

"Silver and Bold" the headline reads, referring to former Idaho coach Robb Akey's big balls move to go for two-point conversion with Idaho down 42-41 at the end of the game. With four seconds remaining, Idaho quarterback Nathan Enderle completed a pass to Preston Davis in the back of the end zone and Idaho became 2-0 in bowl games as an FBS member with a 43-42 win over Bowling Green on December 30, 2009. 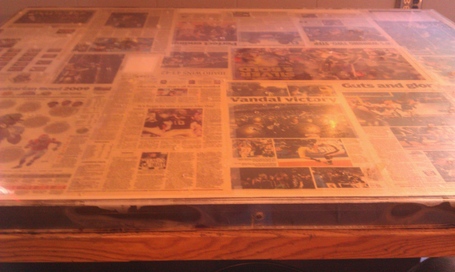 This place I'm referring to is the Corner Club, on the north side of Main St. in downtown Moscow, it is the home of the legacy of Idaho football. Anything worth a damn about the history of Idaho football is memorialized here, from signed game-day footballs, jerseys from NFL draft picks, even a cheerleader outfit from "cheerleader-gate."

It's this place, Moscow's most popular bar, where the past of Idaho football is relevant.

Aside from nights when the Corner Club is packed with buzzed students and alumni proud to have attended this university, you have to go back to that H-Bowl to find the last time anybody really cared.

Idaho's foray into FBS hasn't been successful. Idaho has nearly twice as many seasons with double-digit losses as it does winning seasons. Three of those winning seasons, and its only FBS conference championship, came in the Big West shortly before it discontinued football.

Did I mention that Idaho has now had to change conferences twice because its previous conference discontinued football? (Pour one out for the WAC).

The history of Idaho football is not one of futility; Idaho carved out a niche as the Pacific Northwest's best FCS football program throughout the 80's and 90's. Before Dennis Erickson was winning championships in Miami, he was building that type of foundation in Moscow, Idaho.

Same applies for Keith Gilbertson and John L. Smith before they moved on to bigger schools. Bobby Petrino of Louisville and Curtis Johnson of Tulane were assistants at Idaho at one point. It wasn't just one year of success, it was consistent. It's what current coach Paul Petrino continually recollects when discussing his first stint at Idaho as an assistant.

How about linemen? Jerry Kramer, Mark Schlereth and Mike Iupati all learned their punishing blocking in north Idaho.

Point is, I wouldn't be surprised if you're just now learning that Idaho sponsors football, and I'm sure you're even more surprised that those names are associated with Idaho football. As it stands now, even current students and recent graduates of Idaho's flagship university would be hard-pressed to have any recollection of a time when Idaho football was consistently good.

In fact, it's absolutely at rock bottom.

The records, in order, are as follows:

The next four years are going to be critical for Idaho football, to not only get wins but create a program that is worth the time of its own fans. Idaho has a four-year guarantee with the Sun Belt Conference, with its board of governors meeting after Idaho's second season in the league to discuss whether or not Idaho will survive as a member beyond 2017.

A plethora of factors will play into that decision, including whether or not the Sun Belt can get the James Madison program and others it covets to join. Idaho's worth at the FBS level will be another. Currently, it has not a lot of it. It has mediocre facilities, a mediocre media market and a mediocre program.

Paul Petrino hopes to turn that around. He's the best recruiter Idaho has had in nearly a decade and has created some semblance of optimism. He has a 2014 schedule with toss-up games that could be turned into wins. To even go 3-9 or 4-8 would be a sign that things could actually turn for the Vandals during its time in the Sun Belt.

Right now the Big Sky won't be an option. Idaho is content to watch the landscape of college football play out and align itself in the highest possible division. Athletic director Rob Spear is curious if that could mean the Division IV system with a second tier combining the Group of Five and top FCS conferences.

Idaho likes the money available to it as an FBS member. It gets to collect Sun Belt television revenues and collect seven-figure checks from Power Five teams willing to fly the Vandals out for a beating. Auburn and USC will be doing the honors in 2015.

Really, if there is any program in FBS that tells the story of how big time college football affects "everybody else" it just might be Idaho. Idaho wants everybody to believe it belongs, and it has oh so carefully crafted its budget to allow it to do so. But does it actually belong?