12:03 PM: Marshall's offense takes the field for the first drive of the game and Steward Butler is the first running back after the PA had announced Devon Johnson would be starting. A bit of unease settles in for Herd fans. Then on the second play, Cato hits Shuler on a quick slant for a first down. "Alright, slant pattern all the way down field"

12:08 PM: On 3rd and 2, James Rouse jumps offside and gives Louisiana Tech their first 1st down of the day. Unfortunately, this is going to become a pattern.

12:12 PM: Darryl Roberts is called for defensive holding on the edge as Cody Sokol throws to the middle of the field. "Oh good. Keep up that most penalized team in the conference status, Herd...damn"

12:15 PM: Marshall stops Louisiana Tech on 3 goal to go plays and forces a field goal, which the Bulldogs hit and take the 3-0 lead.

12:29 PM: Tommy Shuler muffs a punt inside his own 10, but falls right on it. "NEVER FAIR CATCH A BALL INSIDE THE 10!" "Especially a wet one." "Damn straight. Doc's special teams sure have come to play"

12:33 PM: Cato has started 2-7 because 5 have been deep balls on a rainy day. But the run game still hasn't worked either. The exchange between Butler and Cato is botched on the run blitz and Louisiana Tech recovers the fumble.

12:36 PM: Kenneth Dixon takes the first play after the fumble 33 yards on the counter for a touchdown untouched. "SOMEBODY GET A HAND ON THE SUMBITCH!" Marshall now trails 10-0.

12:40 PM: Devonte Allen runs under a Rakeem Cato rainbow pass that the defender lost in the rain and Marshall finally moves into Louisiana Tech territory for the first time on the day. 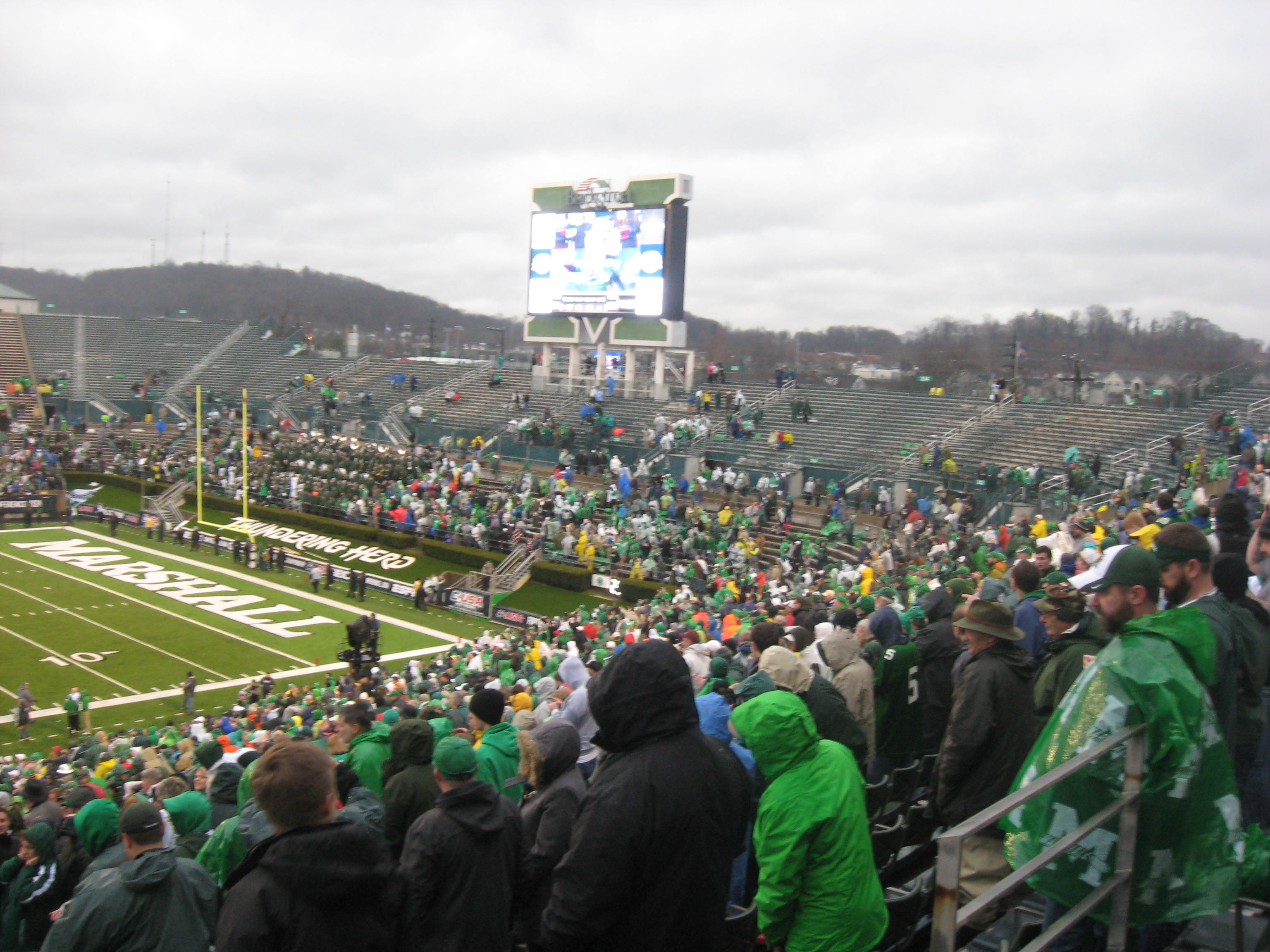 1:07 PM: After trading punts, Marshall forces another Bulldog punt. They have been doing a run out pooch punt to keep it out of the playmakers' hands for Marshall. For some reason though, Marshall is still trying to set up a return for this punt that can't be fielded cleanly. So, of course, it bounces up and hits a Marshall player in the hip and is recovered by La Tech inside the Marshall 40. "OF COURSE! KEEP AWAY DUMBASS!"

1:11 PM: After the bailout, Kenneth Dixon takes the ball 30 yards for a Bulldog touchdown. "Heater, you might want to stop that guy!" "Pretty easy to beat Marshall, run the damn ball at us. Can't stop it." 17-7 La Tech.

1:25 PM: "This game has been UGLY! Too wet to be good." After the teams trade punts again, Marshall's Justin Haig hits a 40-yarder to make it 17-10. "We can't win this thing with field goals Doc! Get aggressive!"

1:33 PM: Against a prevent look, Marshall has their biggest run play of the day as Remi Watson breaks a 29-yarder to move the ball into Bulldog territory.

1:34 PM: Skip Holtz calls the timeout to ice Justin Haig from 45 yards out. Haig misses his practice shot with the timeout.

1:35 PM: After the timeout, Haig nails to field goal to make it 17-13 La Tech at the half. Many of the fans go to the parking lot to get a drink, or just to get out of the windy stadium. 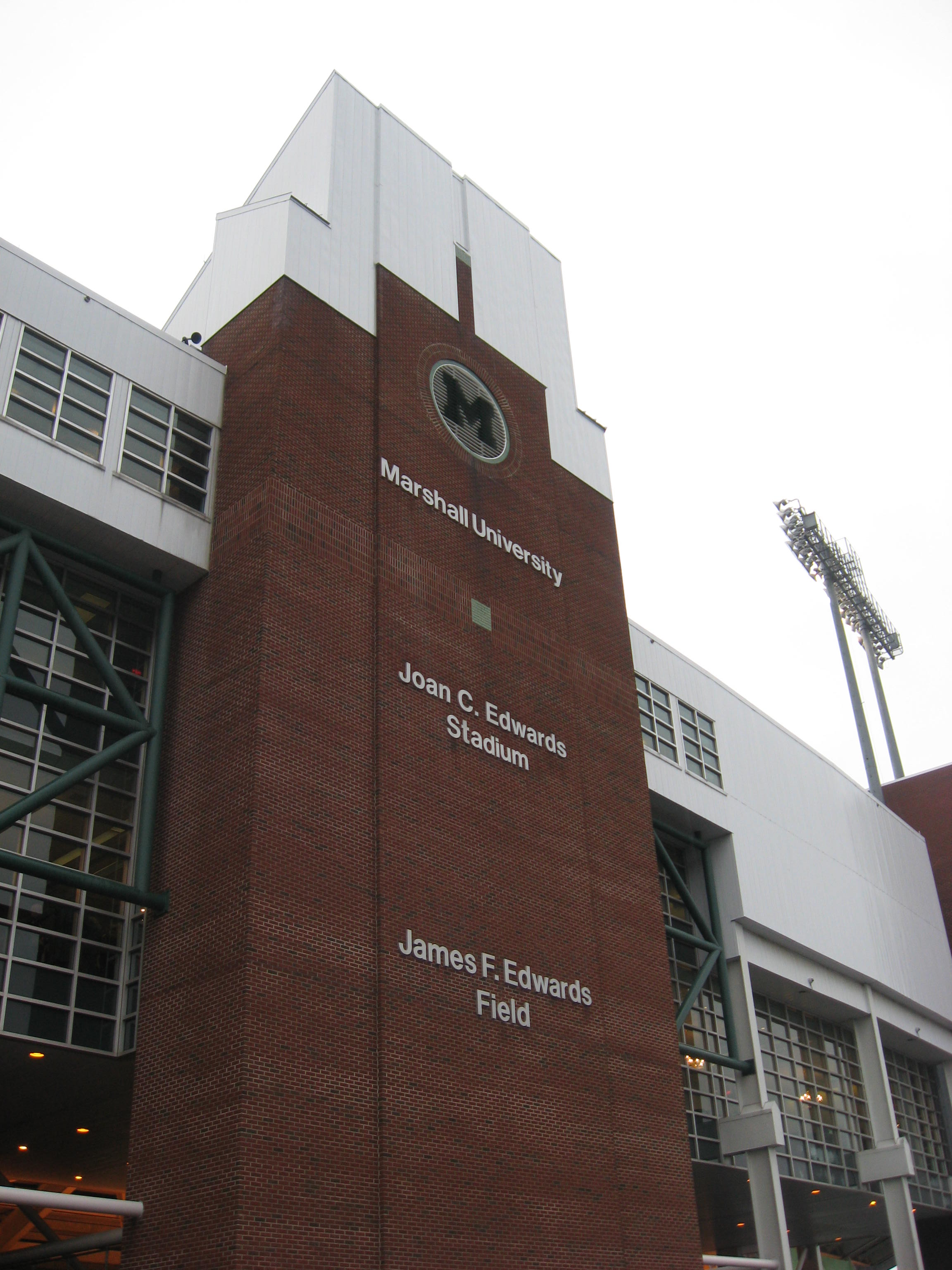 1:59 PM: The second half begins, and the rain that was predicted to move out of Huntington about this time still hasn't. However, the temperature has dropped about 10 degrees since kickoff. "Marshall better win this game or I am going to be pissed I sat out in this crap for that."

2:02 PM: After forcing a 3 & out, Marshall gets back to field the punt. Almost the exact same punt as the one that became a turnover and La Tech touchdown is kicked, but Marshall has learned and is running to their sideline and away from the ball.

2:09 PM: A free blitzer from corner back knocks down a Rakeem Cato pass to force 4th down, where Justin Haig makes his 3rd field goal of the day to make it a 1-point game. 17-16 Bulldogs.

2:19 PM: After giving it another go on his second drive, a good hit on Johnson's shoulder brings him out of the game less than 7 minutes into the 3rd quarter.

2:24 PM: "So Marshall called a timeout on 3rd and 10 to call the same running play they have all day for 2 yards? Real original there Doc." A pass interference non-call leads to a turnover on downs.

2:29 PM: Marshall gets the ball back, gets to midfield, and an untouched blitz from the linebacker position forces a free ball that is intercepted by Louisiana Tech.

2:39 PM: The Marshall defense forces another punt. The Herd has moved the ball, but on 3rd and 9, Steward Butler is brought down by his facemask and no flag is thrown. The crowd at Joan C Edwards Stadium voices their displeasure. "How do you miss that stripes?!"

2:40 PM: A slow developing punt from Tyler Williams is partially blocked. As it nearly goes out of bounds, no one from Marshall plays it and it's returned inside the 20. La Tech's special teams coach Ronnie Bradford is celebrating way too much and makes an absolute ass of himself.

2:41 PM: For the third time after a Marshall turnover, Kenneth Dixon runs in a touchdown. A horsecollar tackle is called at the end of the run, incensing the Marshall crowd after the facemask no-call.

2:44 PM: After looking like an absolute jackass, Ronnie Bradford's unit leaves the easiest points on the field by missing the extra point and keeping the game a 7-point game. 23-16 La Tech.

2:55 PM: Early in the 4th quarter, the Marshall defense steps up and makes a play. At midfield, Gary Thompson recovers a Cody Sokol fumble and the crowd gets loud for the Herd. "ALRIGHT OFFENSE! LET'S DO SOMETHING!"

2:57 PM: Cato hits Eric Frohnapfel on two passes in three plays. Frohnapfel has been open much of the day. "THERE WE GO CATO! YOU DON'T ALWAYS HAVE TO THROW TO TOMMY!"

2:58 PM: Cato hits Tommy Shuler for a big play to inside the 10 yard line. Instead of taking the sure thing between the safeties, Shuler cuts inside and loses the ball. Louisiana Tech falls on it, but Deon-tay McManus rips it back for Marshall. The Herd rest on their laurels and don't try to go tempo, so the play is reviewed. "Can they even review the scrum?" "I don't know. I didn't think so."

3:02 PM: Louisiana Tech is given the ball as the call is reversed. It is Marshall's 4th turnover of the day. "YOU HAD THE PLAY! GET DOWN SHULER! WHY IS OUR GO TO RECEIVER 5'7"?!" Now, in the cold rain, the referee gets downfield, then goes back to get the time. "Why didn't you do that before moron? It's cold out here asshole!" 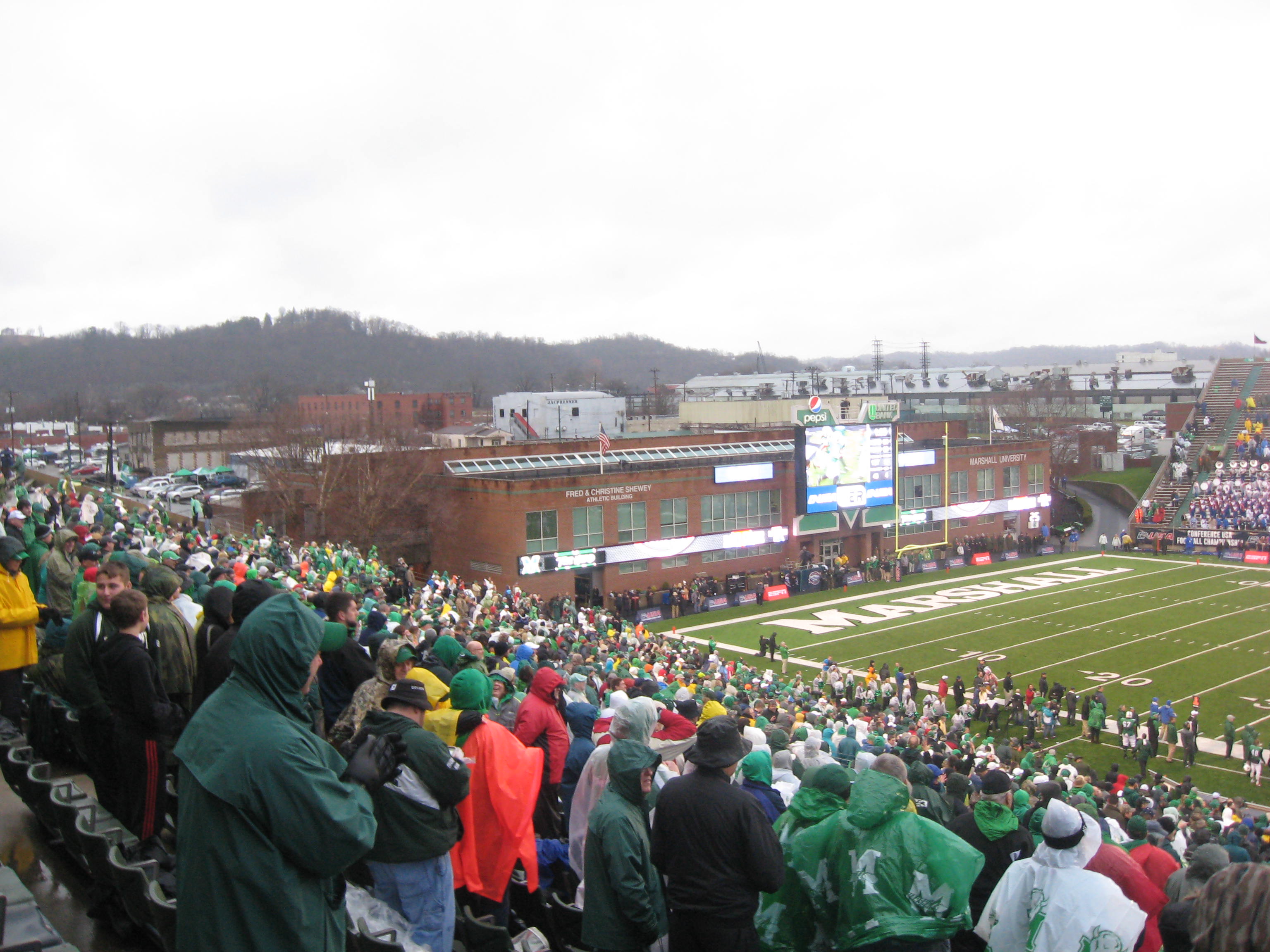 3:10 PM: Deon-tay McManus move the ball deep into Bulldog territory in one play. Then, in two plays, the center is called for his second false start of the day. "YOU KNOW THE SNAP COUNT! HOW DO YOU SCREW THIS UP!"

3:12 PM: Down by 7, Rakeem Cato burns Marshall's last timeout on 3rd and 14 with about 9 minutes left. "Oh good, we used our last timeout. Wonder what this play will be, draw up the middle or 4 verts."

3:20 PM: After the kickoff, La Tech has moved the ball into Marshall territory. On 3rd and 2, the Bulldogs lineup in the Wing T again. "MAKE THE DAMN PLAY!" Raheem Huskey does just that, blowing up the play for a 4 yard loss.

3:24 PM: After a timeout, Louisiana Tech lines up for a 49-yard field goal that they push wide left. A roar erupts from the crowd. "SLOW DOWN! 5 MINUTES! TAKE SOME TIME RIGHT HERE!"

3:28 PM: A Cato scramble puts the ball inside the 15-yard line. "STAY IN BOUNDS YOU DUMB SONUVA BITCH!"

3:31 PM: Cato rolls out and finds Deon-tay McManus for the second time in the back of the end zone. The stadium erupts as the clock shows 1:50 left in the game and Marshall has their first lead of the game. 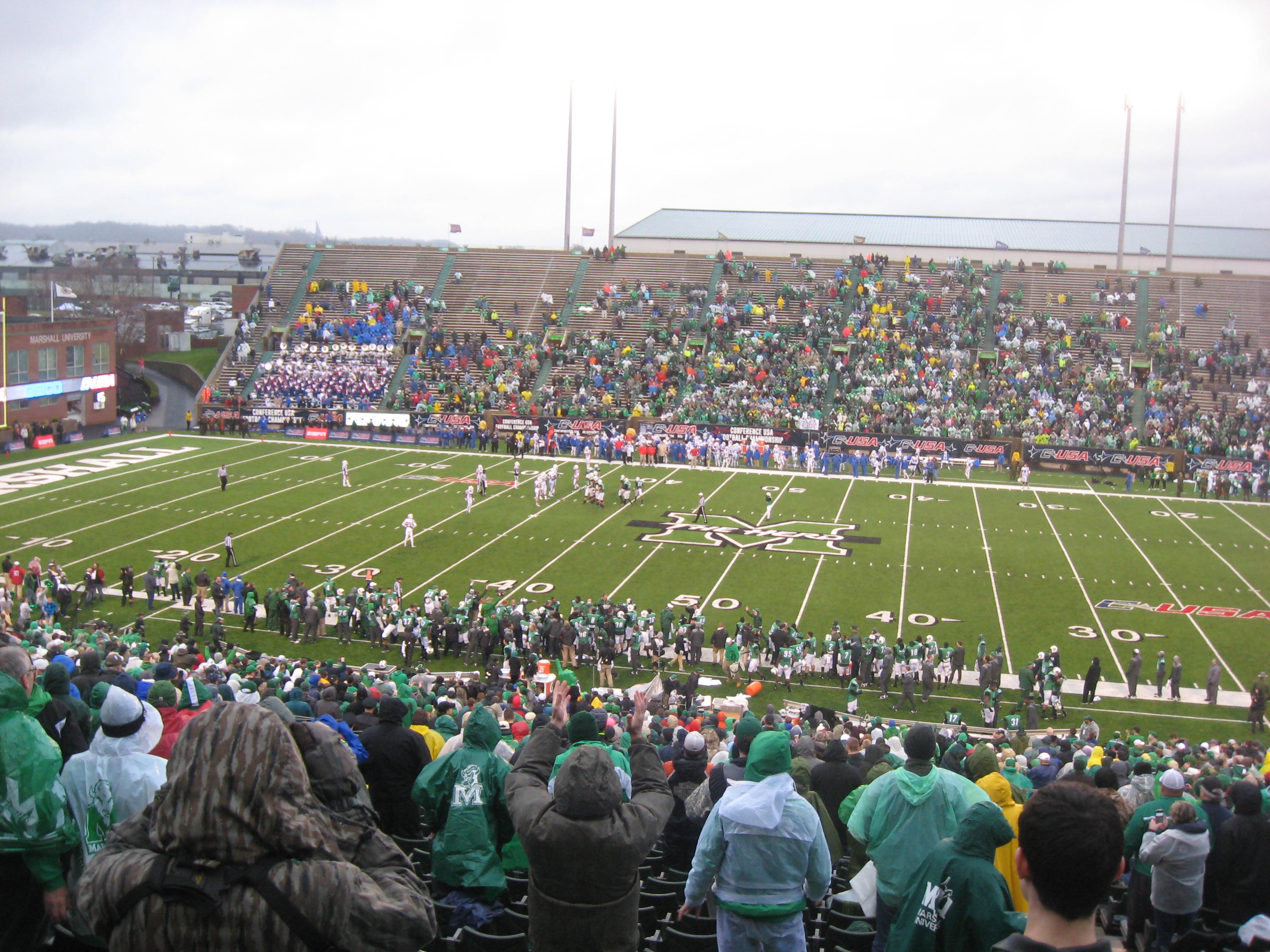 3:33 PM: On the first play of Louisiana Tech's drive, the ball slips out of Cody Sokol's hand and floats right into the waiting arms of Marshall's Neville Hewitt. The stadium is as loud as it would be on the day. Hewitt runs across the field towards the fans, drawing the flag. "OF COURSE THEY THREW A FLAG! WHO CARES BABY! CHAMPS!"

3:37 PM: Everyone's heart in the stadium skips a beat as Rakeem Cato fumbles the snap in the last victory formation. Rakeem Cato runs out with the balls and immediately heads towards the student section. The PA announcers alerts the crowd that they should remain off the field because of the trophy ceremony. 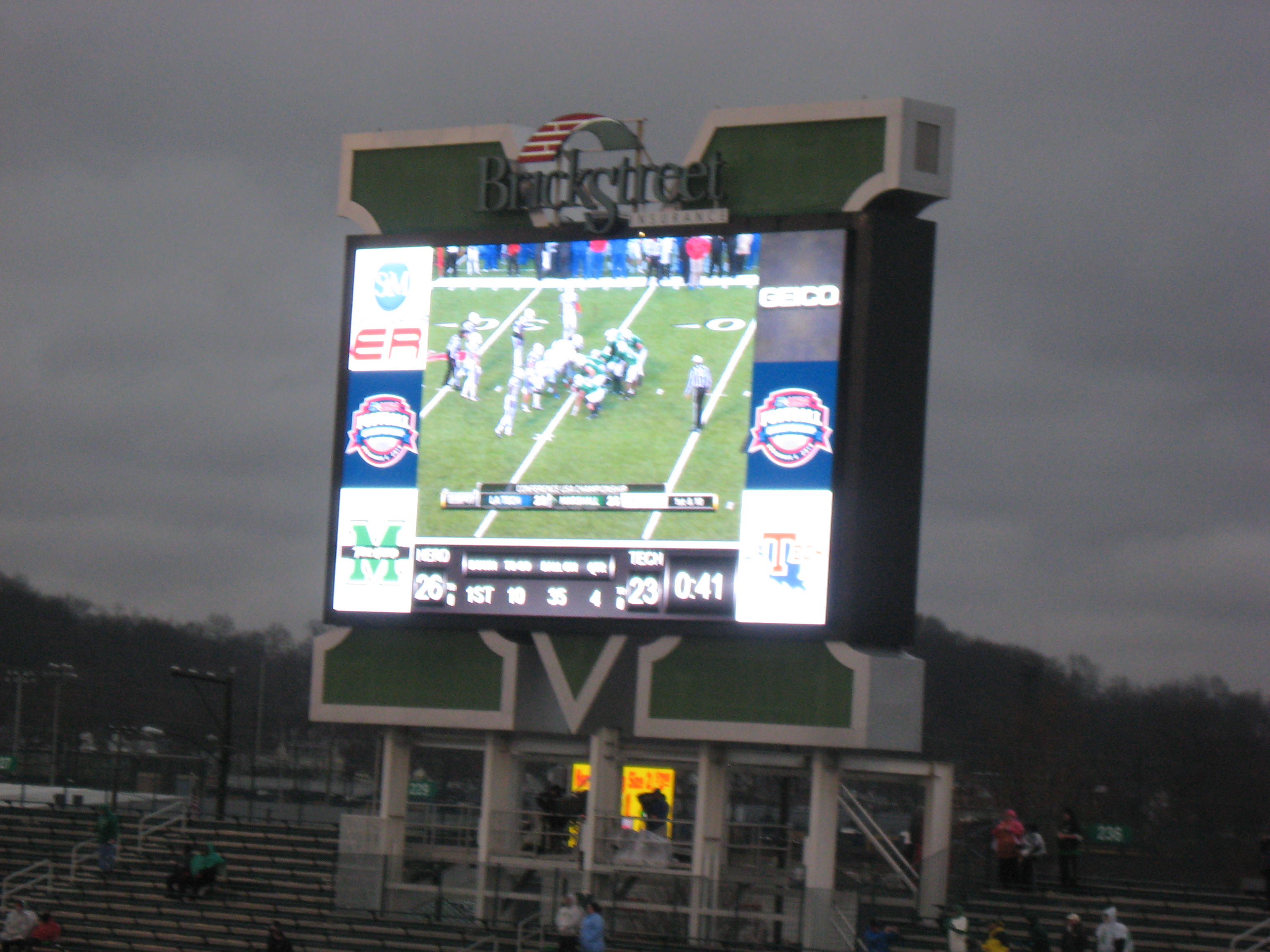