The trolling from Georgia Southern fans never stops. At some point in the last few days someone altered Georgia State's Wikipedia page, changing the name of their stadium from "Georgia Dome" to "Paulson Stadium North." 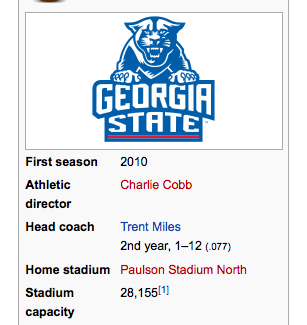 Georgia Southern plays at Paulson Stadium, if you didn't already know, and the players took photos behind a Paulson Stadium North banner after a 69-31 win over State in October.

Thanks to Jim McDonald for pointing this out to us.